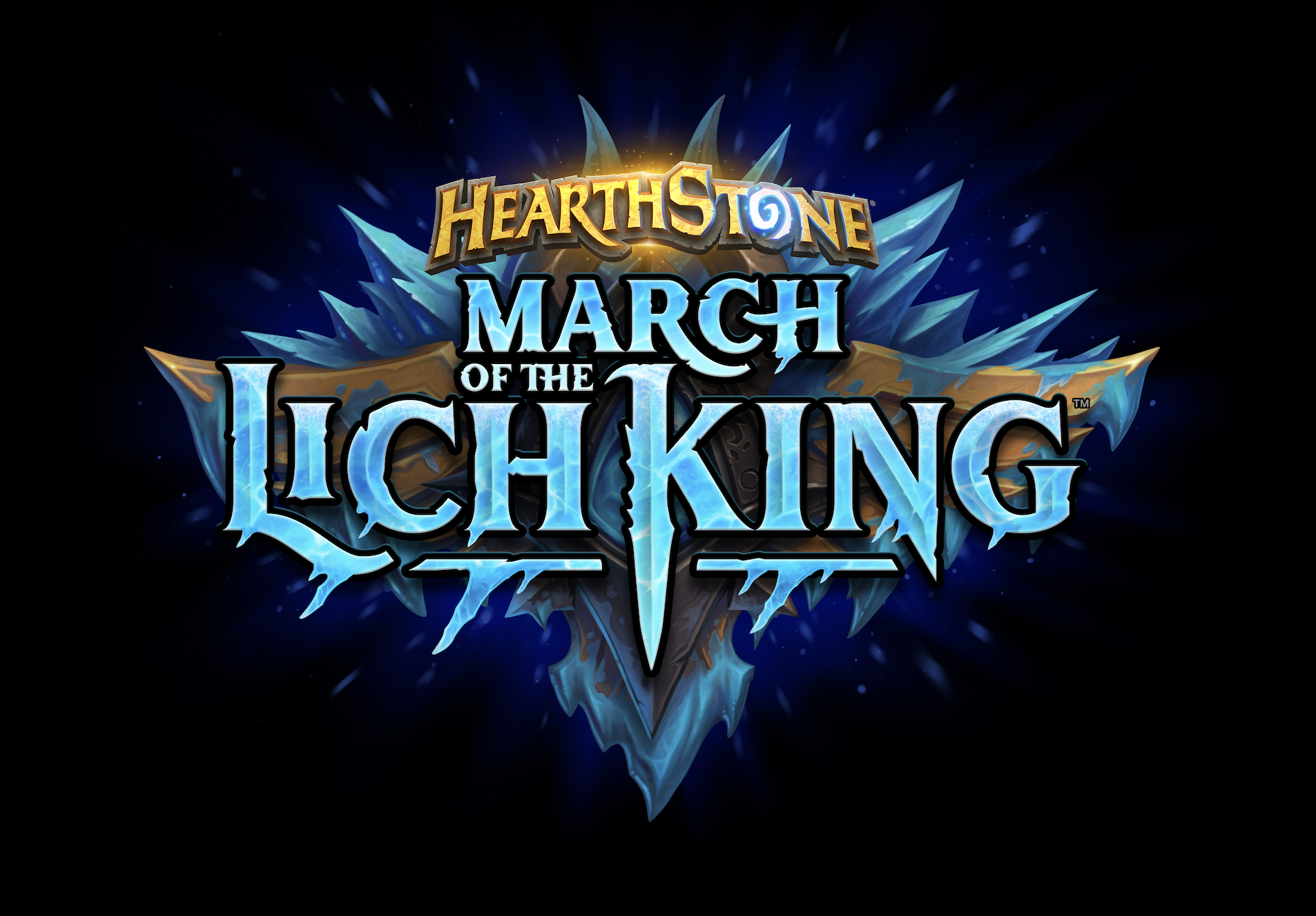 Want to get some of these cards for free? Enter our Giveaway for a chance to win a March of the Lich King standard bundle (click link to enter)- ends 12/6/2022 at 2 PM central.

Armor Druid?! In this economy?! Yes! These cards were revealed by Blisterguy (or more accurately his far more talented daughter) and you can check out the original reveal here. It’s charming, delightful, and exactly what you hope to see from Blisterguy. March of the Lich King has a new and exciting druid package that continues the theme for the expansion of “Yeah… but what if this class did something it typically doesn’t do?” Looking at you self damage paladin. There are some incredibly exciting cards but… is it enough?!

Before we get to the new let’s take a look at the old. What cards does druid currently have that could synergize with armor? 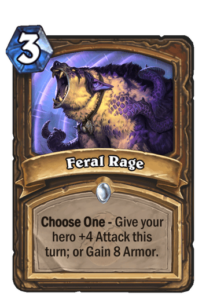 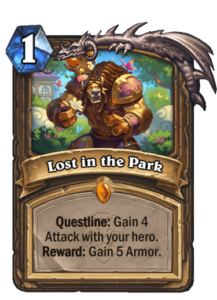 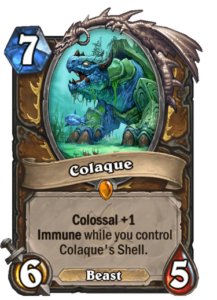 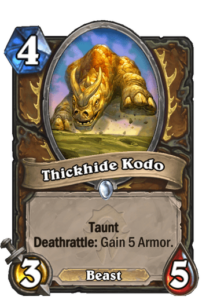 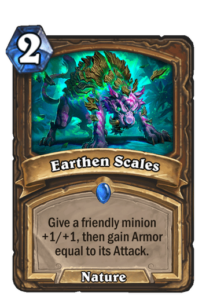 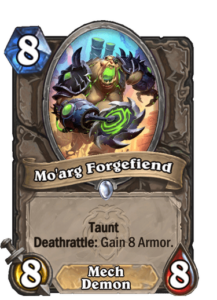 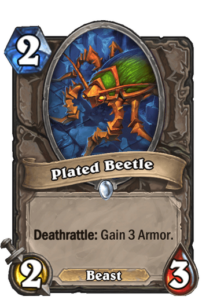 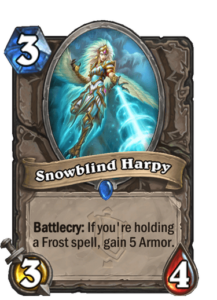 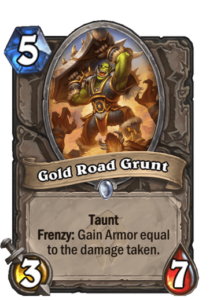 Okay I know I said there’s something here… but not HERE HERE. Boy. Rough. Snow-blind harpy is irrelevant for obvious reasons and Gold Road Grunt is interesting, but not interesting good… interesting… interesting. Plated Beatle and Mo’Arg are both fine cards, but do not offer much on their own. They might be considered if the armor package is good enough, but certainly can’t carry an archetype. Colaque isn’t REALLY an armor card, but it’s appendage does give you +8 armor so it’s something. The Kodo is a little better. Not a bad body, comes down early enough to mean something, and gives five armor. The bad news about ALL the cards we’ve talked about is that they’re death rattles. This normally isn’t significant as you just want the health, but if armor is a resource (spoiler it is) then your armor could get crushed before you get to use it. Feral Rage used to be an incredible card, but is just out paced by so many other things. Lost In The Park gives a decent amount of armor, but they require your hero to gain attack. You’d typically use that attack to trade… but again if armor is a resource than trading with your face isn’t good. Earthen Scales is the lone exception here. It’s an incredible card that continues to see play even after being nerfed from 1-2. It’s incredible. 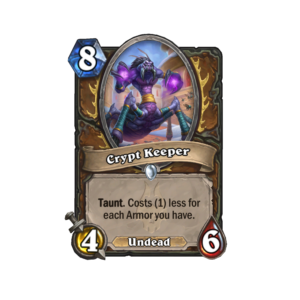 Crypt Keeper: Starting off the batch is corridor creeper… oh wait sorry. CRYPT keeper, but don’t worry they will also be a 0 mana 4/6 more often than not. Without some help this wouldn’t be as guarantee of a play, but with the amount of armor gain that druid is getting this is a massive payoff early game to help control the board. 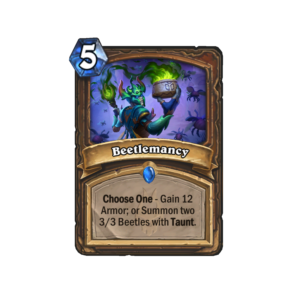 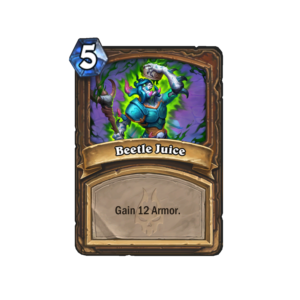 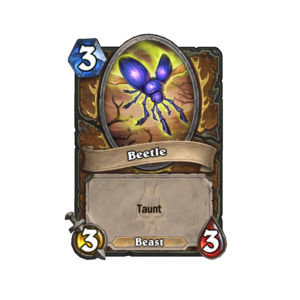 Beetlemancy I’m less sold on. The effect when split is reasonably powerful… AND LOOK AT THAT NAME! BEETLE JUICE! Man I love Hearthstone naming. Neither of these effects are particularly strong. They’re both more situational. The fact that the beetles have taunt means that it will likely still see some play, after all it’s 6/6 worth of stats for 5 mana so it’s probably decent enough to be played at some point. 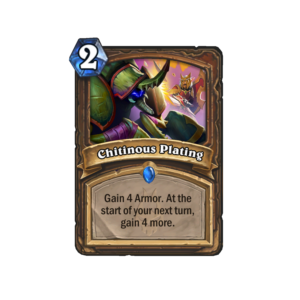 Two copies of Chitinous Plating gets you that sweet 4/6 taunt for free. It’s cheap enough to be interesting and it triggers at the beginning of your turn again which means you can use that armor without the mana burn. Cast one copy and turn 2 a second on turn 3 and BOOM Crypt Keeper is free. Good health, good cost. Good card. 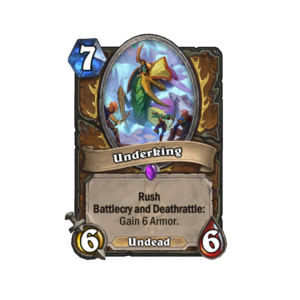 The Underking is very understated. Why this thing was not 6/6/6 I’ll never know. At 7 mana it just doesn’t trade in enough. I’m guessing it originally was 6 mana, but too strong too early in final testing… at 7 mana it just is far too slow. Now druid still has the best ramp in the game so maybe they don’t care… but you could instead just play scales of Onyx and it’s… better? Now there is a magic Christmas land where this card is incredible… but one moment on that… 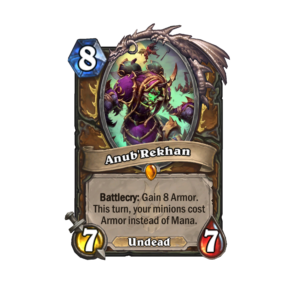 Anub’Rekhan: This is absurd in the very best ways. It allows for an insane amount of combo potential. It is on its own a 7/7 for free and then if you already have some armor you can do some absolutely disgusting combos. We’ll talk more about those combos in just a minute.

Overall these cards have some great potential, but I don’t think it is a full on archetype. I think you run Anub’Rekhan and a few armor cards (cut underking bye bye) and you try to ramp and survive until you can combo for the victory. Will this be a few additional cards in another Renethal/Denathrius deck? Yeah I think so… Because all you need is 5 armor and 8 mana to pull off Brann/Denathrius with Anub’Rekhan. 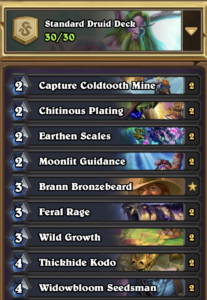 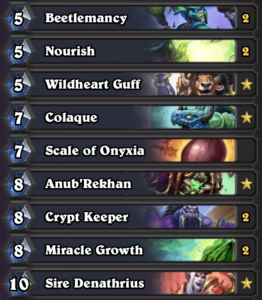 I could add in Renethal (it’s the better version), but this is my article and I won’t stand for his shenanigans. There’s ramp with a bit of an earlier finisher. There’s a strong mid game with ThickHide and Crypt Keeper, and then late you can Denathrius Brann early enough that even if you don’t kill them you get a board clear and a 10/10 with life steal. How early you ask? What about turn 8 with Anub’Rakhan? All you need is five armor at the beginning of your turn. This is the most likely deck… but let’s get weird with it shall we? 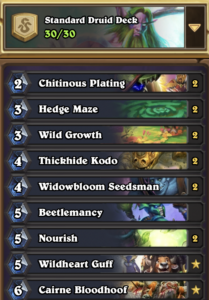 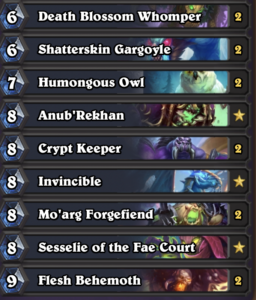 The lowest cost card is 2/3 mana so this isn’t viable in an aggro meta, but it has a lot of chunky boys to carry the late game. Hedge Maze allows for burning blade and Cairne to help stabilize, while Humungous Owl and Invincible threaten late. What is Invincible in there for? Because I love him. Is it wise to cut him? Don’t you dare. He will lower is drop rate in WoW even more. COME ON HE’S A GOOD BOY. I DON’T CARE IF HE DOESN’T SYNERGIZE! He’s a good boy.

There are some effective cards, but I wish the archetype offered some more synergies with already having armor. Perhaps cards with “battlecry: if you have five armor gain +1/+1.” could be fun and welcome additions. As it currently stands many of these likely slide right into Denathrius Renethal druid to help survive, but not much else. I really hope that I’m wrong on this one and Anub’Rakhan might be powerful enough to push the entire archetype so… let’s keep our hopes up high shall we?

Daniel has been playing Blizzard games since 1998 when his babysitter would play Starcraft in front of him. Now a days he mostly play Hearthstone Battlegrounds, but dabbles in Overwatch, WoW, and Starcraft. He also hosts a podcast that is adult oriented called Blizzlet. The podcast that is "Sometimes Hearthstone, most times not."