Welcome to our forth installment of the Karazhan Card Evaluation, a series in which we review each and every card spoiled before the release of the whole adventure on August 11th. As always we appreciate comments below or via twitter @OtakuMZ1978 and/or @DannyDonuts_HS
Don’t forget, the thoughts presented here are made on what we know already, not what will come. To see how the picture changes with newly released cards please go to the Karazhan Power Rankings. 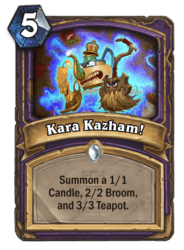 Danny: Overall, I believe that this card’s power level is average. It will be a ok to good card in arena, but like all other average cards in the game, unless it fits specifically into an archetype that already exists, or is close to existing, then the card will probably not see play.
I don’t believe that this card will fit into any of the current archetypes for warlock, as it is too slow for zoo, and not powerful enough in my opinion for Renolock.
It is important to note that there may be a deck that uses this card after a few more expansions. Cho’gall could potentially make a spell warlock deck viable in the future, but warlock would need a few more good spells in order for the deck to be viable. But as of now this card seems like it will not see play.
Rating 4-5

OtakuMZ: Force of Nature for Warlocks? I must admit, I am not to fond of this spell until there is no “Dishes and Furniture” tribe, haha. Ok, being serious again, I think you can get a lot more value by a lot of other 5-drops that will render Kara Khazam! mostly useless despite its cool name.
Rating: 5 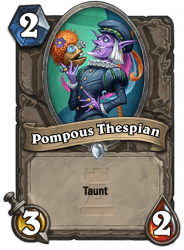 Danny: Hopefully people are not going to freak out about this card being “power creep” like when Magma Rager got upgraded to Ice Rager. Frostwolf Grunt was played in no constructed decks, and this is barely on the cusp of being played.  However, the stats on this minion are on par with Huge Toad, which saw place in midrange hunter for a bit.  The reason that Huge Toad was played in that deck was the synergy as a beast, and the random ping that it provided. If looking to fit Thespian card into a deck, the taunt needs to be useful to either protect a smaller minion, or the taunt itself needs to add extra value to the deck.
There are two places that I feel these two requirements may hypothetically be met. The first would be in zoo. Having a two mana taunt that deals 3 damage may be enough to protect some of the smaller minions in the early game. Zoo however, has many good low cost cards, and cutting some of them for this card would be rather tough. You might need to build around this card, and that version of zoo probably will be less powerful compared to the current version.  The second place where I could potentially see this card slipping into is bolster warrior. This card would allow for two 2-mana 3/2 taunts including sparring partner, which saturates the mana spot. This allows for a lower curve taunt warrior, and with the inclusion of protect the king may be enough of a push to create a tier 3ish version of bolster warrior. These examples are quite a stretch however, and unless the perfect storm occurs, I don’t think we will see competitive use of Pompus Thespian. Nevertheles, it will be a good arena card.
Rating: 4

OtakuMZ: I have no strong feeling about this card. I simply think it is not ment for ladder. Arguably it is stronger than Frostwulf Grunt, which for its own is an outright (5) in competitive play. This doesn’t make Thespian any better. It can still be cleared by a 1-drop and does not add any additional value, which a lot of 2-drops provide.
Rating: 5 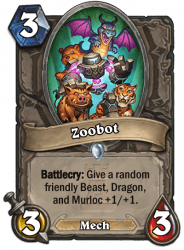 OtakuMZ: I did not like The Curator at first, but with enough theorycrafting i became in love with it. Therefore I am less hesitant when looking at Zoobot. I am happy that it does read “friendly”, otherwise it would be total garbage. People will quickly begin to draw worst and best case scenarios calling it weak or OP. I go for the most probable case again which is it hits 0-1 minion with the buff, maybe exceptionally 2 and almost never 3. It is a 3/3 for 3 with which you can get away feeling not too bad. Definetly better than a 4/4 for 4, because turn 4 is really an important one compared to turn 3. Hitting one minion gives enough value for the mech to be a reasonable pick despite being still sub-par compared to cards like Tinkertown Technician, which prvided an additional Spare Part. Sure, you have to build a deck around this card but there is already a draw mechanic in place that helps you get your different tribes out (The Curator). There is still the murloc problem, but I think it will be taken care of as we see more releases. 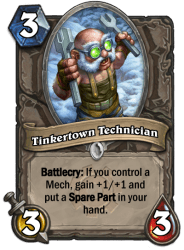 What I do not understand ist the reaction of people calling the card absurdly powerfulI initially wanted to rate this card decent (3) and despite all its potential I still will go this route simply because the 2-3 specific minions on board is quite hard to set up. And let’s be honest, if you already have a dragon, a murloc and a beast on board that sticked long enough for Zoobot to buff em, you already were in a really good position. I think in the latter scenario it is a win more card. Compared to e.g. Blood Knight, which can quite easyly set up to be a 6/6 or even a 9/9 with the potential to remove divine shields from opponents minions the effect apruptly does not seem too OP anymore IMHO. À propos artwork: where is the murloc in it? Anyway, I think it has the potential create new archetypes, most probably Zoo Hunter and Paladin. I would also be delighted to see me being wrong and Zoobot turning out better than predicted by myself.
Rating: 3, A

Danny:  I am really excited about Zoobot. The first comparison that I made with this card is a conditional Shattered Sun Cleric that can get more value. In my opinion, giving one minion +1/+1 is ok value out of the card, 2 minions is really good, and 3 is absurd. There are very few current decks that have such a variety of cards, so it doesn’t seem to fit into many current decks, but I have a feeling that there may be a powerful deck that uses beast, dragon and murloc synergies.
The deck that I feel this card will fit into best is an aggressive beast druid. You would run Sir Finley, Azure Drakes for draw, and the new druid beast package with the druid beasts (including enchanted raven). This would make sure that almost every minion in the deck (minus cards like leeroy or fandral) is a target for this card. Or, you could make a midrange version of the deck and include The Curator in the deck. This will probably be a solid tier 2 deck, and with the addition of a low costing murloc or dragon, could allow for this deck to actually be top tier.
Rating: 2

(1) Excellent: Cards that are top-notch or potentially overpowered. Most decks would like to run them, e.g. Dr. Boom.
(2) Good / Competitively Playable: Superior cards that will very likely see frequent play, e.g. Mire Keeper.
(3) Decent / No Competitive Staple: Cards that normally do not make the cut for competitive play but are overall well-designed and might fit into specific decks. These cards can be powerful in Arena though or really viable for newer players but you would not likely see them in tournaments.  Also vanilla cards such as Chillwind Yeti fall into this category.
(4) Poor / Too Situational: Underwhelming and/or overcosted cards. These cards have inferior stats and/or underwhelming effects and will not see competitive play, e.g. Voodoo Doctor. Grouped in this category are also cards that seem to be good at first glace, but their effect are so highly situational that most of the times you will not be able to pull them off, e.g. Ghaz’rilla. The latter can arguably be fun and even powerful IF their effect goes of, of course. In any case, these cards I like to call “what-if cards” are so unreliable that they render themselves unusable in competitive play. Feel free to raise these cards to a “build-around” card or just have fun with!
(5) Unplayable: Straight out bad stats, poor card design or simply useless cards that are even too bad for casual play? You have them in your deck? Delete Hearthstone! ? These cards you would not and should never put in your deck, e.g. Magma Rager. Okay, one exception here: you want to troll your opponent so that he thinks you are the worst Hearthstone player alive! ?
(A/B) Archetype Defining / Build-Around: Cards that are only viable if you build your deck around them, e.g. Grim Patron.
(C) Counter / Tech Choice: Cards that mostly have underwhelming stats but are highly useful to counter specific cards or to play against a very uniform meta, e.g. Eater of Secrets.