Now that Season 6 has been under way for some time, many of you may be hitting those mid-season blues. It may be the right time for you to take a break from farming rifts and go after some of those cool new cosmetics. The most fun and interesting ones, in my opinion, are the pets and the wings. For those who are unaware, patch 2.4.1 introduced a variety of new cosmetic pets and wings that can be earned in-game as drops. There are a total of 20 new pets and 2 new wings that are farmable.

For 19 out of the 20 new pets, you need to look for a new type of goblin, the Menagerist Goblin. They will drop a random pet out of the 19 possible and will not drop duplicates.

For the last pet, Liv Moore from the TV show iZombie, you must go to The Weeping Hollows in Act I and search for a Unique/Purple zombie named Ravi Lilywhite. It is a relatively rare spawn, but don’t lose hope and keep at it!

For the Falcon Wings, you must go to the Gardens of Hope Level 1 in Act IV. You must look for a Mysterious Chest, which will drop the wings when opened. The above image shows some of the spawn locations for the chest. This is one of the easiest of the new cosmetics to find.

The most difficult of the new cosmetics to farm is the Cosmic Wings. These drop from a very rare Unique/Purple pony in Whimsydale named Princess Lilian. Note that it is Whimsydale, and not Whimsyshire. You can only reach Whimsydale through the portal created upon killing a Rainbow Goblin. Due to the two layers of RNG in finding a Rainbow Goblin and also finding Princess Lilian inside the portal, the Cosmic Wings will be a fairly long grind for most. For me, personally, it took roughly 17 hours of goblin farming to obtain.

In order to minimize the amount of time it takes to obtain the new pets and the cosmic wings, you will want to farm some specific areas that are known to have a high spawn rate for goblins. The best route to take to find goblins is:

Act I – Northern Highlands, Southern Highlands + Cave of the Moon Clan, The Weeping Hollow (If you want to find Liv Moore as well, otherwise you can skip this area)

The Northern Highlands is a small area with a high spawn rate for goblins. They typically spawn in the lower half, around the waypoint and towards the entrance to Southern Highlands. Southern Highlands is larger but also has a decent spawn rate for goblins, and also contains the Cave of the Moon Clan. Both levels of this cave can have a goblin, and the spawn rate is especially high on level 2. If you are interested in farming for the Liv Moore zombie pet as well, you can then head to The Weeping Hollow and search for Ravi Lilywhite. If you aren’t interested in her for the time being, feel free to ignore this area.

Both the Tower of the Damned and the Tower of the Cursed have easy to follow paths, are quick to explore, and have solid spawn rates for goblins. The Core of Arreat is also a linear map with a decent spawn rate for goblins. Since farming goblins can be fairly tedious, having these easy maps to clear through helps to ease the frustration after many hours. By clearing through these Act I and Act III areas, you are able to farm both the Menagerist Goblins as well as the Rainbow Goblins. I ended up with 18/20 pets before I managed to find the Cosmic Wings, but your mileage may vary. The wings are pretty cool and you’ll be happy to have them whether you’re a cosmetics aficionado or not. 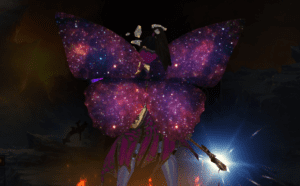 Good luck to everyone on their journey to collecting everything! Gotta catch ’em all!

0 responses to “Farming For Pets and Wings”