Every week we bring you the Deck of the Week, but sometimes we just cannot wait that long to show you something interesting. This is Bonus Deck, where we try to surprise you with cool decks that might just change the way you perceive this game.

Last weekend I had the chance to talk to Team Celestial’s Silentstorm. Silentstorm is currently a top ranked NA player, and my interview with him will be coming soon. Meanwhile, take a look at this deck that he decided to share with us. 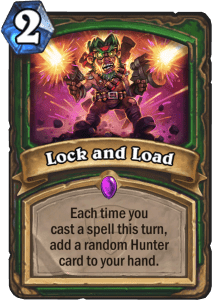 Silentstorm himself claimed this deck wasn’t exactly refined, but it has a lot of potential, more importantly it’s a lot of fun. You can see at first glance that this deck focuses on getting a lot of value out of Lock and Load. With only 5 minions on your deck, you’d need your 25 spells to keep you in the game until you can pull off some sick combos.

This deck is very non-conventional and not easy to play. You’ll have to manage your resources perfectly and constantly decide which spells to use to keep your enemy’s board clear, and which ones to hold for big combos down the line.

The inclusion of a single King’s Elekk is very interesting, since most of your other minions are bigger you have a decent chance of winning the jousts. You also have a big chance of drawing into Emperor Thaurissan, who will make your combos so much better. Don’t forget that King’s Elekk is also an activator for Kill Command.

Here are some tips for playing this deck, straight from the source:

You always want Kings Elekk in the opening. Animal companion is a keep too. Keep Explosive Trap if it’s aggro and Freezing against control. Sometimes going off with Lock and Load and three cheap spells early is good enough. With slow games you can cycle a lot more after Emperor procs.  In some games it requires knowledge of the Hunter class because you have to play for topdecking

This deck will probably not take you deep into the legendary ranks, but its definitely serviceable and it’s a blast to play with.