Garr is the first boss on the Molten Core Wing and his hero power constantly deals damage to all minions. Cards that proc when taking damage could be very useful here, things like Acoylte of Pain, Armorsmith, Frothing Berserker, and Grim Patron make a good argument to trying out a version of the Grim Patron Warrior that was so popular last week. You could also try and tech in Gurubashi and Amani Berserkers to make the most out of your opponents Hero Power. 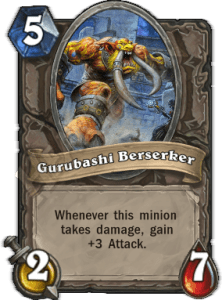 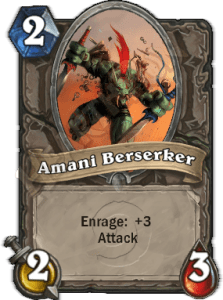 The thing is that he also has some very annoying minions that you have to deal with, lucky for you they are just food for your Frothing Berserker.

Running Silence, Circle of Healing, and Mass Dispel might be a choice. Personally, I felt like my Warrior weapons were enough to clear Firesworns, the main idea is that they don’t all die in the same turn. Plus, Frothing Berserker gets HUGE on this fight, if you can make sure that he stays alive you will wreck him in no time. You might want to Run Cleave to make sure some of the minion die on different turns, Mind Control Tech and Crazed Alchemist also deal with the Sworn but I don’t think they are needed here.

In Heroic Mode his Hero Power remains the same, but his Firesworn are much more deadly.

There’s a big incentive to wanting to play Priest here, running 2 Mass Dispel, and 2 Circles and Mulligan Hard for at least one of them. Grim Patrons are still good on Heroic, but are too slow if you don’t have a way to handle the Firesworns properly.

But we could also be very greedy and try to get frothy with it, man Frothing Berserker gets huge with Garr’s Hero Power. That’s what I did and I scraped a win on my first try but then kept going at it and failed quite often, you do need to drop a turn 3 Frothing otherwise you are just setting yourself up for failure with this strategy. You also likely need to drop an Armorsmith to avoid dying.

I was running a different version of the deck when I first killed him, but I made some modifications that should make things faster. Frothing is likely the only win condition here so you need to Mulligan Hard for it and Armorsmith. You need to try to kill off one Firesworn Per turn. 3 dying on a single turn is game over, so you might want to kill two off to prevent 3 from dying together.

Priest is the safer option here, mulligan HARD for Circle of Healing and Mass Dispel, also add a second Mass Dispel to your list if you have it.  Basically you want to play the control game here, use your hero power, healing spells, silence effects, Mind Control Tech, and Power Word: Shield to prevent the little exploding elementals to wreck havoc on your face. Remember that while silenced Firesworns won’t fire at you, they will count for the damage their peers throw at you.  Crazed Alchemist is a good way to get rid of a single Firesworn, and a buffed up Maexxna can take care of the Earth and Fire Elementals that this guy like to put on the board on later turns.

Ironbeak Owl immediately dies to his Hero Power, but it can silence his big taunts on a turn you have lethal. Also, he does have Bloodlust so you might want to clear some of his stuff even if you silence all of them.