On Friday we give you the Deck of the Week, but sometimes we just cannot wait that long to show you something cool. This is Bonus Deck, where we try to surprise you with cool decks that might just change the way you perceive this game.

Grim Patron and Emperor Thaurissan might have been the newly released cards that everyone is talking about, but the Rogue’s Gang Up is also a card of massive potential.

The first thing you notice about Gang Up is how it has no immediate impact on the board, you’ll also notice that this card loses you some card advantage. So how can this card be good at all? Well, it can basically improve your deck quality a bunch. Ever had your Dr.Boom taken out by BGH and wish you could play a second copy?  Well, with Gang Up you can play a second, a third, and even a Fourth.

The Catch is of course that you have to find the cards in your deck before you can actually use them.

But then again when has Rogue had a problem quickly going about its deck? This card is very strong in the late stages of the game when you are close to running out of cards and you want to add a few more threats to your game plan. This also has a very cool side effect, and that’s the fact that thanks to these extra cards it will take you longer to fatigue.

And that’s what breaths some new life to the old Rogue Mill Deck. Thanks to cards such as Coldlight Oracle plus Shadowstep and maybe even King Mukla, you can quickly fill your opponent’s hand with cards. With their hand full then you can use Vanish and Sap to outright destroy their minions, any cards that your opponent overdraws will also be destroyed in the process. 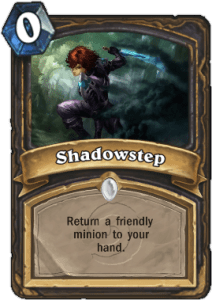 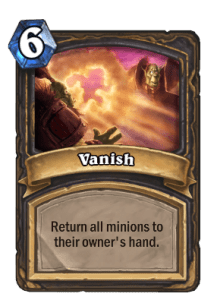 Pretty cool huh? Of course its not as easy as it sounds, you will also have to handle their board and make sure you stay alive through the onslaught that they bring upon you with their greatly increased hand size. This makes cards such as Antique Healbot and Deathlord pretty valuable for you, specially since the Death Lord helps your opponent reach fatigue faster. Finally, you’ll also be wanting some removal and even AoE clear for when the times get rough. 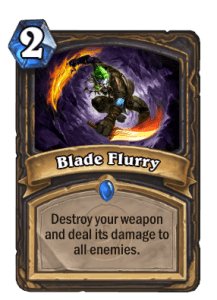 But I’m sure you are here for the decklist, so lets jump right into the action.

The Idea of Mill Rogue has been out for a while, and with the addition of Gang Up there’s plenty of different lists across the internet. Other versions out there use cards such as Dancing Swords, Lorewalker Cho, and other tricks. Here’s is the particular combination of cards I’ve liked the best thus far.

Now playing this deck is quite tricky, if you try playing this like its just any other deck you’ll probably finish your first few matches with a very low winrate, claim the deck is horrible,and proceed to throw insults at this humble servant for making you waste your time. To avoid that, here’s a few tips to play this deck to full effect.

First of all Coldlight Oracles are important, you should try to mulligan for them. Once you have your drawing Murlocs, just don’t blinding play them. Make sure you can follow it up with a Shadowstep to preserve the Oracle, or Gang Up to make sure your deck is filled with the murlocky goodness. Preparation + Vanish is also a valid followup to Coldlight Oracle on certain scenarios.

Use your cheap rogue removal to stay on the game, and always keep an eye for good opportunities to burn cards. If your opponent has too much cards in hand, a combination of Mukla/Coldlight Oracle/Shadowstep can make sure that your opponent loses some of their precious cards to overdraw. This can be killer against certain match-ups as you can make them lose their combos or winning conditions. Still, don’t be greedy and make your opponent draw for the hell of it, that’s a formula that will lose you games.

The value on your Azure Drakes and your solid spell removal should be enough to keep you contesting the board during the mid-game.

If you’d made it to the late game in good shape then you are very likely to take the game, the fatigue burst that you can cause as your Coldlight Oracles start drawing into more Coldlight Oracles is insane, but be wary of your own health. You might even want to consider using one of your gang ups on Antique Healbot if you think the heal will do more for you during the fatigue war.

It might take you a while to get a handle on the finer details of this deck, but it is a pretty fun way to spend an afternoon or two getting unlikely wins. Your opponents might not be as amused though!

This deck type is bound to be quite popular during the upcoming days so you might want to see if anyone on Twitch is playing it to see it in action and learn how to play it a little bit better.

Do you like this deck? Do you hate it? Do you have a killer modification that will make this deck better? Sound off using the comment section below.