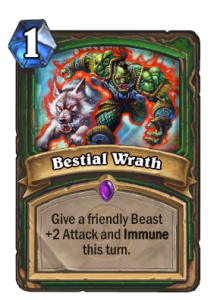 Ok, this article might be a bit late but better late than never right. ISP problems are never fun but they are now sorted and we can tackle what’s considered one of the worst Hunter cards out there.

Personally, I’ve always thought Bestial Wrath to be somewhat of an underrated card getting way too much hate. I’ve always wanted to make good use of it, but sadly 800 dust is way too much for a shaky experiment. Today, we take an indepth look at this Hunter Epic and try to figure out why this isn’t one of Rexxar’s favorite cards.

The first thing to know is that a card can be overall pretty solid, but that doesn’t mean that it will get used. A card needs to fit in the meta, both work well with other strong cards that make up your deck and against the strong cards that your opponent is packing. Even if Bestial Wrath’s effect might be overall solid, it depends heavily on you having a beast, this means that Bestial Wrath will get better and worse depending on the overall strenght of the beasts that are currently avaliable.

But lets put the synergies and requirements aside for a while and lets look head-on at the effect that this card provides. +2 attack and immunity for a turn, is this worth 1 card and 1 mana? Let’s compare it with cards that can achieve a similar effect.

We have Abusive Sergeant and Arcane Shot which both allow you to do 2 extra damage for 1 mana. Arcane Shot doesn’t leave a body on your side of the board, but also doesn’t require that you have one already deployed. It also goes through taunts, something that Sarge and Bestial Wrath cannot do.

Our little abusive friend is more similar to Bestial Wrath, they both require that a minion is already out before you are granted your 2 extra damage which are actually tauntable. The problem comes with flexibilty, Abusive Sergeant can’t forgo the +2 attack if you desperately need to put the 2/1 body on the board, it can also give +2 attack to any enemy which could put them on BGH range. Sarge also leaves a 2/1 body on the board, while Bestial Wrath only “gives” you a creature if the immunity makes your beast survive a trade-up. Though to be fair, it isn’t likely that you use this card to attack face unless you get Lethal out of it. The catch is while Sarge only gives you a 2/1 for 1 mana (which is fair), Bestial Wrath has the potential to leave a bigger threat on the board. Bestial Wrath could help a Highmane tackle down a Dr. Boom and it would leave you with an intact Highmane still up.

And that might be the main problem with Bestial Wrath, even in my example you are wasting 1 damage. To get full value out of this card you need to have a beast out, and your opponent needs to have a creature that has exactly 2 Health more than your Beast’s attack. And while there’s still pretty good value to kill a creature “for free” even if  you end up wasting the 2 extra damage, if this kind of scenarios happened more often Bestial Wrath would actually see play.

1-mana removal can be super strong in the right scenario but you need a beast up and ready to attack. Also, the attack is spent. Once again this 1-mana removal tool pales in comparison to Shield Slam.

Bestial Wrath has been a WoW Hunter Spell for a good while now. It has changed a bit through the years but the gist of it is giving 20% extra damage to your pet for 10 seconds or so while making it immune to crowd control effects. Some iterations and I think later on a glyph also made it so your pet couldn’t be killed while under the effect of Bestial Wrath which pretty much explain the immunity.

You can tell this is a direct adaptation from WoW, in order to have this card stay true to itself it needs to stay true to WoW’s Bestial Wrath effect, which interestingly enough nowadays also enrages the Hunter for 10% extra damage and cheaper spells.

As discussed earlier, Bestial Wrath improves with having stronger beasts in your deck. Maybe if we had more quality beasts in our Arsenal, you could get consistent value out of Bestial Wrath as is. Sadly, the Ironfur Grizzlies, Silverback Patriarch and Oasis Snapjaws of the world won’t cut it against the current meta.

Cards like Jungle Panther and Lost Tallstrider seem like they would work well with Bestial Wrath, but they do not compare with the powers of Mechs, Blast Mages, and some of the other options you have. Unless we get really quality beasts like we got quality mechs in GVG, Bestial Wrath is going to need a buff before it sees play and there are two real options here, either we drop the mana cost to 0, or increase the mana cost and effect along with it.

a 0-mana Bestial Wrath would be a much more interesting option, meanwhile if Bestial Wrath also gave attack to the hunter and allowed it to go 2-for-1 then it could be a pretty strong option, even at a higher mana cost. 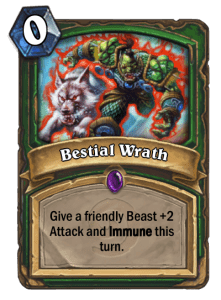 This is super boring, but would be a small incentive to actually use this card and more beasts on your deck. 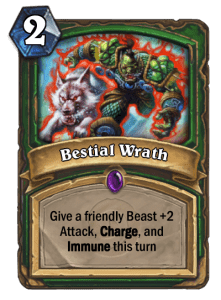 This is a nod to the old Unleash the Hounds, and while the original version was super broken that was in part because its low mana cost, and the fact that it was global. Now you could compare this with the Warrior’s Charge and point out that it is significantly stronger at a lesser mana cost and giving immunity. But this is an epic card, plus restricting this to beasts mean that the only way to get this on a windfury minion is Young Dragonhawk, and also Hunter doesn’t have cards like Inner Rage and Rampage which would allow for absurd OTK combos like the pre-nerf Charge did. The big deal here is getting rid of one Bestial Wrath’s biggest problems which is the need for an attack-ready beast on the board 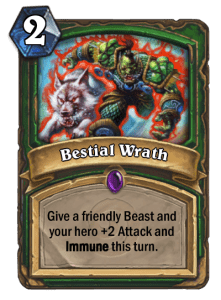 This is nod to the current incarnation of this WoW Ability, sure it isn’t an exact match but I went for the simpler text. 4 damage for 2 mana might feel a bit excessive but this does require having a beast in play. Allowing this card to possibly go 2 for 1 early would make it very strong and would maybe give Hunter a viable option for control builds.

Do you think some of the versions above are still too weak? Maybe absurdly overpowered? Messing with cards without the ability to test them is actually pretty challenging, but I try to do my best.

Be sure to check out past editions of Mending Mondays, and if you have any suggestions, be sure to leave them on the comments or hit me up on Twitter.

See you next Monday!

0 responses to “Mending Mondays #8: Bestial Wrath of the Lich King”