If you recognize the card from this article’s title then you remember one of the strongest cards of Lord of the Ring’s TCG original set. Hearthstone’s Savagery? Not so much, unless you count its original version and even what we got after the first nerf. 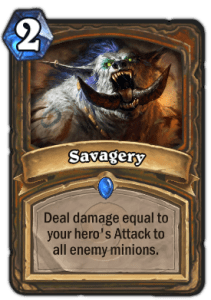 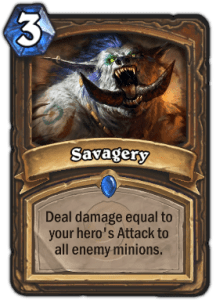 Yeah, these look quite a bit better don’t they?

To put it simply, it is way too hard to get a decent amount of attack on a druid. Even harder to do it with a good mana value. The first problem is that Savagery relies on other cards, and those other cards aren’t exactly world beaters. What are our options to get numbers rolling in the attack column? Well we got hero power, Claw, Bite, and Savage Roar. Now, Savage Roar is an admittedly strong card, but it is usually played in tandem with force of nature and I don’t see that many situations where you just had to deal 2 extra damage to a minion. 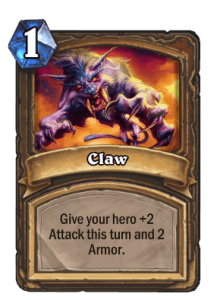 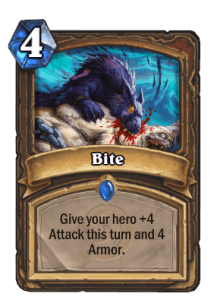 But what if we compare it with other one drops? Can we actually get good value out of it? I mean Arcane Shot and Holy Smite offer two damage for 1 mana. Claw allows you to match that, but you need the extra mana to do the combo, even if its getting actual use out of the Claw effect. With Bite things look a bit better, but often enough you are better off using a Swipe.

More than Arcane Shot or Holy Smite, Savagery reminds us of Shield Slam. But while Shield Slam is one of the strongest cards in the game, Savagery has to go cry in a corner. It’s not hard to see why either; armor stacks over time, while attack just lasts a turn. Warriors get two armor out of their hero power, and Shield Maiden and Shield Block are pretty good cards by themselves.

As evidenced by the original version, this cards is meant to combo with Claw and Bite. It looks like they wanted to open the pathways for decks that used all of these attack boosting cards to dismantle opponents. I like the concept of Savagery a lot, so I don’t really want to change much about it. I just want the card to have added value.

Blingtron opens a lot of interesting possibilities for our crappy cart of the week, but Savagery doesn’t only just proc off your Hero’s attack, Spellpower also helps boost the damage output. This makes Savagery slightly less useless. Then again, a healthy dose of spellpower is likely exactly what warranted the nerf on the first place.

First things first, if Savagery is going to become a thing. We need better cards to support it. How about a battlecry minion that gave you some attack for the turn when you played it? Something like Shieldmaiden but for attack, that’d alone would make Savagery better.

Perhaps Savagery can bounce back from the depths of terribad-card-hell with a few new cards, but we can really do some stuff to make sure this ends up getting up atleast more value than say moonfire.

So, draw a card. If Savagery also gives you a card, then you can cycle it if you don’t get an opportunity to combo. It can be a sort of Mortal Coil. Though considering Flare’s recent nerf, you might have to increase the cost.

Another option to stop the dead card predicament is to give it some base damage. Even one extra damage could at least allow you to combine with hero power to clear a 3 health minion for 3 mana.

You could also allow it to hit face, and then a double bite, innervate, double claw, double savagery combo would be a really convoluted way to deal 36 burst damage to an opponent.  Or simply put yourself in the position to do 24 withi double bite, double savagery. A 4 card combo is still a bit of a stretch, but Druids have the tools to extend games and actually a single bite+hero power+2 savageries could do 15 damage in a turn for 8 mana. That’s a nice follow up to Alexstrasza.  That’s not that different from lets say a Garrosh combo but I’d still be careful about it is as I doubt a deck like that would be much fun to play against. 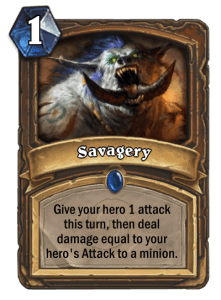 This might look like a super small buff it it ends up doing a world of difference. It gives you 2 extra damage off the bat to put it on par with Arcane Shot and Holy Smite, but it still gives you the option to do more damage if you combo it with other cards. The latter compensates the fact that this can only target minions, plus this is a rare card. This version of Savagery clears two 1-health minions for just 1 mana which is very nice and similar functionality to Arcane Missiles, now if you combine it with Hero power you can clear two 2-health minions for just 3 mana like the Shaman’s Forked Lightning. Combined with Claw it can clear two 3-health ones for just 2 mana, and if you pair it with Bite you can kill two 5-health minions for 5 mana, achieving max value. You could always just clear one minion and go face with your Hero.

Perhaps this version isn’t going to set the world on fire and introduce the card to the meta, but the small boost makes this card WAY more interesting and it becomes a very strong contender if the Druid ever gets some better Attack enhancing cards.

Ok, I cheated. Going back to a previous version of a card might not seem very creative in my behalf but how is this not comparable to Shadowflame? Sure it costs one mana less, but also cards that boost your attack are way more rare than minions. Plus shadowflame gives you the flexibility to use it on a minion you had deployed earlier, allowing for a turn 4 Flamestrike thanks to Ancient Watcher. This only deals 2 damage on turn 4 when you pair it with Claw, and compared with bite it becomes an actual Flamestrike at the 7 mana combined cost. Sure you get 4 attack and armor out of the deal too, but you are using two cards to proc the effect.

Just like we saw last week with the Kidnapper, Savagery is another card who got nerfed in beta/development and it went from strong, viable card; to glorified Arcane Dust. The understanding of what makes Hearthstone Tick has grown a lot this past year and cards that might have seem horrendously overpowered back then would be right at home on today’s meta.

If this version of Savagery gets out of control (which could certainly be the case with its Spell Power interaction),  then bump the Mana Cost up to 4 like Shadowflame. But this board clear might be just what the doctor ordered for Resto/Mill/Control Druids.
ROAR!

0 responses to “Mending Mondays #3: Savagery To Match Their Numbers”