Adam takes the stage to explain the process of making your favorite heroes.

Producer what to feel they are in control and have a plan and a goal in front of them, but in reality it can be hard to get everyone on the same page.

It takes a lot more people then you would expect to make a hero.

You start with a small core team, that decides if an idea is worth fleshing out.

Once you have a solid concept, it is time to expand and make the character fun and playable.

Once you have a functioning hero it is time to build personality and style.

Once you have a great hero in game, it is time to bring in another group to build the story.

Once that is all done they still need to bring in people to get that hero to the players.

Dan takes over the stage to dive into abilities and what it takes to bring them to life.

Prototyping is all about finding the fun.

they start with an existing hero stripped down, all abilities taken away.

They have no weapons nothing, then they add a single simplified ability.

They do this using a special program called statescript.

Once a lot of states are defined we get the basic ability in action.

Is the ability fun? Is it balanced? They try and try again until both answers are yes.

Once you have a ability kit that is fun it is time to bring in another team.

They are tasked with making the heroes come alive. They aren’t just building statues.

First your start with a concept.

Then each block will go through multiple phases to refine and define how it works.

once this is done for all the parts you have a rough idea what the hero will look like in game.

Then it is given a mesh.

Once the hero has made it to this stage, it is time to make it actually move.

Dylan joins the stage to explain how movement rigs work.

The model is broke up into pieces. Joints are added. Then a rig is added, and you have made a puppet. 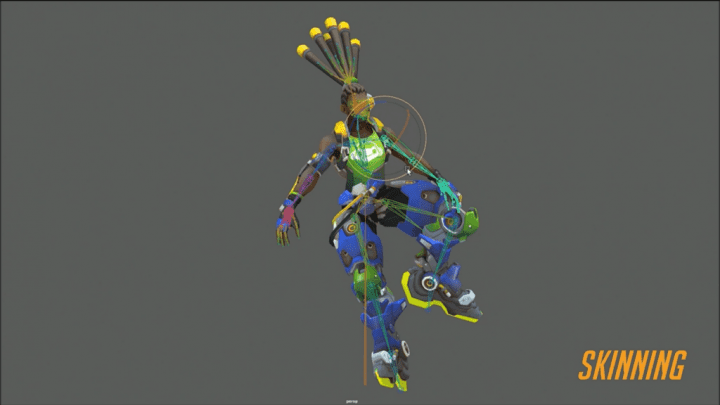 Once the hero puppet is ready it is important that physics be added to the joints, otherwise you end up with spaghetti man.

Once the hero and rig are properly fit together it is time to hand off to Animators.

Jesse takes over the stage to go into the animation process.

Once the animations are finalized it is time to add details to make everything shine.

Kyle comes on to go over the process as applied to weapons.

Once the art of the character is finalized it is time to turn to the vfx team to make things really sparkle.

Chris goes over the process it takes to make things appear right.

First up things can be too much clutter. But it is perfect to show the scope of abilities.

Once things are simplified and decluttered you start to get the feel of the ability. Now you get faced with perspective issues.

Once all the different parts of the ability and transparency are defined we are given a useful inspirational ability.

Paul tells about how we use the human voice as an instrument to bring humanity to a robot and a bird.

Bastion as he was previously known Gunbot was straight forward robotic mechanical. Early on it was decided he would have a bird companion and would need emotions after all.

Trying to just use clips for emotion was determined not to be effective. It was decided an actor was brought in to bring the human element to Gunbot.

Ganymede as a bird was going to be lyrical. Like gunbot clips were tried first, in this case simple bird song. It didn’t connect. Justin whistling while walking turned out to be the key to the song.

Gunbot and bird companion had grown and finally felt like the beloved Bastion and Ganymede.

Now that things are nearly finished it is time to return to production to finish everything off.

A producers work is never done, bad sadly that is the end of the panel.