by hsdecktech - 5 years ago     show comments

A couple days ago, Hearthstone Game Director and professional beard-grower Ben Brode took to Twitter to answer a couple questions about the ranked ladder “grind” and whether we will ever see the long-desired Tournament Mode. As is the nature of Twitter, his answer was short and sweet: they are still working on the ladder and trying to figure out what we, and by extension, they, want from any incoming Tournament Mode. 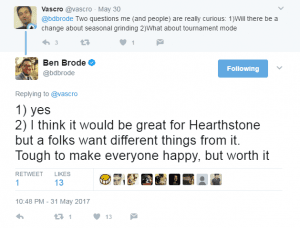 In the wee hours of this morning (Pacific time), a Redditor noticed the exchange and shared it with the community. Just over an hour ago, Ben commented on the Reddit post, to expand on what he meant.

He explained that he sees four major issues with the current ladder system: 1) top players need to grind too much to get to the fun matches each month; 2) lower-end players can play just a few matches before progression stops–that is, they win just a few games before they get “stuck” at ranks 17-20; 3) new players who enter ranked get destroyed; and 4) doing the same thing over and over again each month feels like a “grind.” He sees the fourth issue as the toughest to solve because progression (gaining ranks and stars) is fun, but too much progression feels like a grind. However, he believes that an in-client Tournament Mode might help alleviate “grindiness” even more than any potential changes to the ladder.

For what it is worth, I tend to agree. A well-implemented Tournament Mode would allow players to feel “competitive” without forcing them to play hundreds of games per month. Moreover, any alternative mode of play would give players more options for taking a break from the ladder.

Back to Brode: the issue with a Tournament Mode is that there are several different aspects of tournament play that different players want. Some players gravitate strongly toward the social aspects of tournaments, and might prefer that the in-game client support Fireside Gatherings. Other players simply want the glory (and prizes) that comes from winning a packaged event. Sometimes, these aspects are at odds with one another.

Brode says there are two “obvious” potential Tournament Mode models that the team has already considered and, apparently, rejected:

Brode thinks the first option only works for in-person events and the second version does not go far enough, so the team is exploring “crazier” ideas.

Brode closes the comment with an assurance that the team is listening and does want to hear what the community wants out of ladder and tournament play, so here’s my quick take:

Check out all of Ben’s comments below, and comment with what you’d like to see in Ranked and Tournament modes–maybe your ideas will catch his eye.

I want to expand a bit on the first answer (I love twitter, but sometimes 140 just don’t cut it).

I think there are 4 major weaknesses to our current ranked system: (1) Top end players have to grind too much to get fun matches each month. (2) Low end players have very little progression: just a few wins and then they get “stuck” at rank 20-17. This is the vast majority of active players. (3) New players who enter ranked get crushed hard (after a pretty good experience in Casual). (4) Doing the same thing over and over again each month feels like a ‘grind’.

I think we can do all that (hopefully – this stuff is difficult to predict without live testing). The hardest to hit is number 4, since progression is fun, but the more you have, the more ‘grindy’ it feels. I actually think that things like a potential Tournament mode could help with that even more than any specific change to ranked.

So, Tournament: I think there are a couple specific ‘fantasies’ related to playing in a Hearthstone tournament. Put another way: What is fun about tournaments? I think different players have different things that draw them. For me, for example, one of the things I enjoy is going to a venue, meeting my IRL opponent, and sharing a tense battle with him or her. Then I like to go over and check on my buds, to see how we’re doing as a group against the crowd. We have a lot of people attending Fireside Gatherings each month (and running tournaments), it’d be nice if we could make that process better in the client.

There’s also a strong desire to have the ability to compete for glory against other players from the comfort of your home. Hearthstone is by its nature a competitive 1v1 experience, so Tournaments would need to offer something above and beyond what we’re already doing. If you want a “packaged” experience, where at the end you are crowned a winner, Heroic Brawl and Arena actually get part of the way there, although they don’t feel like they fit the whole fantasy that people are missing.

There’s, I think, two ‘obvious’ tournament mode implementations that we had considered recently.

(1) Pump a bunch of players into a bracket. Wait for all players to finish, then start the next round. Repeat until there is a winner. Upside: Clear tournament fantasy. Downside: Long waits between rounds. Need to clear a day to play, but you might be out in the first round (really variable time commitment)

(2) If you’re familiar with the development of Arena (and if you’re not, here’s a very old video going through it ), it’s basically a story of us trying to solve the problem from the first approach in an 8-player bracket. The result is a competitive, asynchronous event. Heroic Brawl is essentially the version of tournaments that can be done asynchronously online.

Now, I think 1 is only really ok for in-person events, and we already have 2 and for some reason it doesn’t feel like it’s scratching that “tournament” itch. So we’ve been exploring some crazier ideas. 🙂

We’ve been reading threads about ‘tournament mode’ here and other places (and in different languages) that range back years, scouring comments and trying to get a full picture of what we think the community (which isn’t a single entity, but lots of individuals with different perspectives) will enjoy. I always enjoy reading and discussing what people want from tournaments in Hearthstone, so please keep it up!

An aside: When I make comments like this, detailing our philosophy and confirming what is or is not in our plans, I often read responses like “pr talk” or “says nothing”. We do have the option of only doing communication in the form of announcements, but we’d be communicating a lot less, and not here on reddit. I love talking with the community. I think it’s healthy to vet our ideas and get feedback on them before we commit to any specific implementation. But I think the expectation needs to be that it’s a conversation, and we’re explaining where we’re at and our thoughts, not announcing specific changes. Looking forward to reading your thoughts!

Is a lawyer by day and a cardslinger by night. He's decent at both. He's been playing Hearthstone since open beta and writing about it for a few years now.