In Season 34 through 37 (January to April 2017), I forced an experiment upon myself. I finally wanted to track all my games in ranked as well as get some serious coaching. One point stands out for me as a player: I play most games on my tablet (iPad), which kept me from tracking my stats in the past. How did this experience turn out? Continue below!

The first few pieces of advice you get when you ask good players how to improve on your game are “track your games” and “get a coach”. The problem with that for me was that deck tracking on mobile isn’t as comfortable as it is on a desktop PC, if possible at all. On PC you have a variety of tools that allow you to track your stats and even get replays. The two most widely known programs are Track-o-Bot (ToB) and Hearthstone Deck Tracker (HSDT). Either one app has its point going for it. I ended up using both at the same time when I play on my PC. With the help of ToB, I can contribute to the vS Data Reaper Reports, and with HSDT I can save and share replays as well as get a very comfortable overlay ontop of my client displaying a lot of useful information that. The latter sometimes feels like cheating to be honest.

There is an angument against this kind of overlays though. If you are a player who wants to compete in (offline) tournaments they may impair your play in the long run. Deck trackers are usually prohibited in tournaments. This cannot be controlled in online cups but very well in offline ones. Relying on the overlay to know what you and your opponent already played therefore will suppress your skill in tracking cards in your head (or on paper). There is a whole article on that by my friend  Zansher Husref from the Good Gaming crew which you can find here.

Let’s focus back on mobile devices. Things were awful until I discovered the Track-o-Bot Companion App (iTunes Link) by dominikjHS. It is not affiliated by the original ToB but uses its API to get your data added to an existing account. With this neat little program, you are finally able to track your games on iOS devices too – and not in a vacuum. Data will be sent to your ToB account and be contributed to the data collected on your desktop machine. For me, this was the breaking point I needed, because I play 90% of my games on my iPad. You can even use it with your Apple Watch!

There are some limitations, though. There is no full game tracking available where you can recapture on all your turns. There is no overlap either. In the end, you will only be able to see your deck, opponent’s deck, the game mode, the rank at which you played, Coin (yes/no) and win (yes/no). Also, games have to be entered manually despite the automatic process on desktop PCs. The latter is easy though utilizing a widget that will enable you to complete data entry of a matchup in 5-10 seconds without leaving the game. Just swipe from the top down and do some quick clicks in two masks – done (see screenshots below). 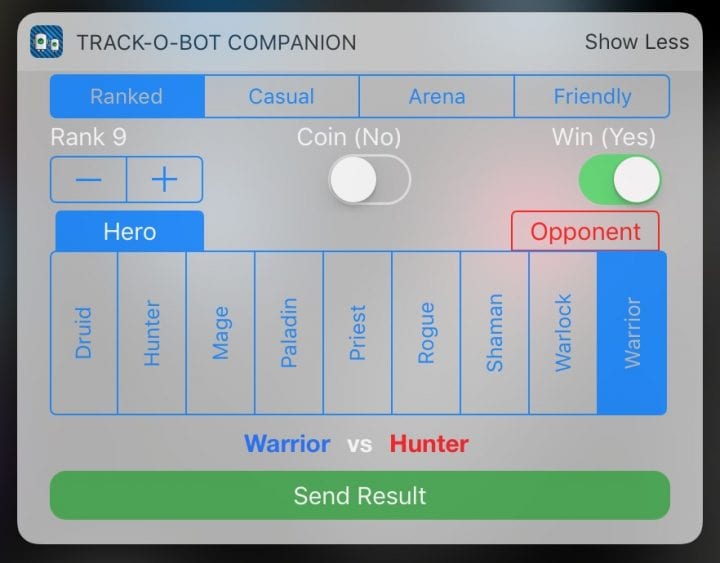 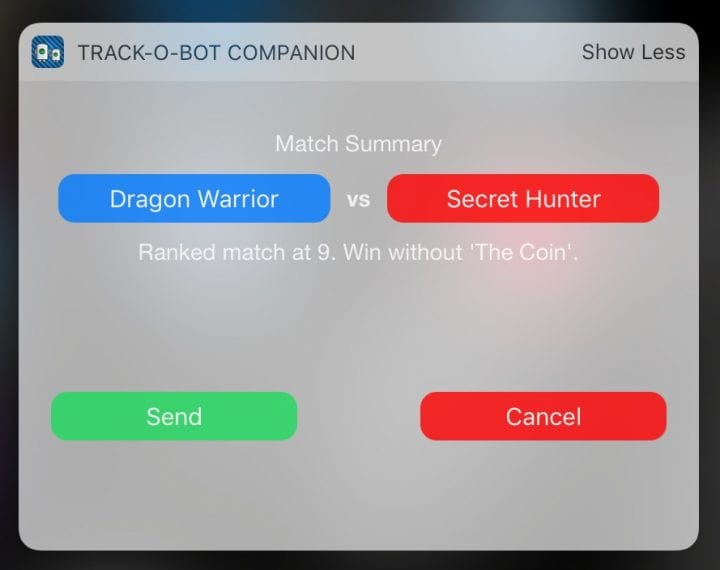 The Experience of Deck Tracking (and Coaching)

Before tracking my games I considered myself mediocre at best. I felt like my climb on the ladder was a struggle and in the end, I thought of myself a bad player. Don’t get me wrong, I feel like I have good knowledge of the game but I never was happy with my execution. If you would have asked me how my win-rate would look like, I would have said that it is “almost 50%, I only climb on win streaks.” It turned out, I am not bad at all! But more to the numbers later. ANotheraspect of deck tracking, that opened my eyes was that I happened to change decks less often because I could reassure me, that my feeling of “this deck is not good” was not true. As many pros will tell you, one of the most common mistakes a new or inexperienced player makes is to change decks too often. The psychology behind is that we tend to remember bad events (losses) more than good ones (wins), e.g. I felt Miracle Rogue was not a deck for me to get out of low ranks but it turned out that I had an almost 70% win-rate with the deck from ranks 18 to 12. Man did that feel great!

After I felt more confident, I did the second important step; I got myself a coach. I used GamerSensei (GS) to find mine and ended up with Vortex, Sparta, and HawkEye – who were all amazing. Coaches on GS cost in between $ 5-30 per hour, depending on the popularity. Another way to find a coach is through the HS Coaching subreddit. I can only encourage everybody to try out being coached, it is eye-opening! If you cannot afford a coach the second best is to watch your famous player on twitch. By watching the best play your desired deck your play will improve significantly.
(As a side note Just if you wondered: no I am not sponsored by GS and I do not get anything to recommend the service, I just think it is very good. )

I hope this encouraged some of you out there to follow my example and get better at the game we all love.

Finally, here are my example stats for Season 34. I managed to get to rank 5 with ease. The Hunter and Druid games in the statistic screenshot below were played in Wild play mode (23 games total). All other games (177) were played in Standard. I concentrated on three decks: Miracle Rogue, Dragon Priest and Midrange Shaman (without Pirates). I happened to get a win-rate of almost 60% total. Sadly, with a working week of regularly 60-80 hours, writing articles and being a husband, I had no time to make the final push to legend. Anyway, now I feel confident of being able to do it once I can squeeze in more games, which feels great!

I had a similar experience in Seasons 35 to 37 and so far in Season 38 in which I further improved because I switched decks (in a controlled manner) on the basis of my personal statistics and additionally based on the vS live Data Reaper Report (beta).

The vS live DRR is very good for evaluating what you are likely to face at your rank and what decks are best against that. Apart from that, I highly recommend to use the regular report the guys from Vicious Syndicate do weekly with one limitation: I would look at the matchup chart for rank 5-1 only, because in the lower ranks you can suspect a lot of netdeckers that play decks without understanding the general strategy or that do a lot of misplays because they are still learning the intricacies of that particular deck.

Summary of Simple Rules to Improve Your Play