Let’s continue the series of crafting guides on Epics and Legendaries with the Mean Streets of Gadgetzan (MSG) expansion. I will give you an overview what Legendary cards are relevant in the Un’Goro meta as of now (Season 38). I base the evaluations on Standard play mode with competitive/ladder play in mind. I do not focus on Wild as my experience is limited in that play mode. If a particular card is not strong in Standard, but extremely useful in Wild, please let me know so that I can add that to the card description.

The ranking system is categorized as follows.

This evaluation may change with the inventions of new decks or when existing decks get refined, please keep that in mind. For the already released guides, which provide additional thoughts an disenchanting etc., click the images below:

Ok, without further ado, let’s dive into the shady alleys of Gadgetzan!

Reevaluating the value of the MSG Legendaries in the Un’Goro meta is particularly interesting because one entire faction, the Kabal, was largely reliant on a card that has since rotated to Wild – Reno Jackson. For that and other reasons, a lot of the cards that were staples just a couple months ago are now much weaker. Still, that can be seen as a good thing for people who are deciding what to craft now, as there are fewer “must crafts” to get through. 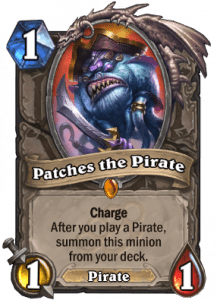 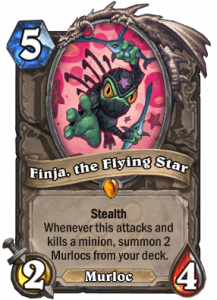 Patches, the Pirate. No deck that is running Pirates will go without him. It is just too good to get free damage in the form of a minion while also thinning your deck. Be sure to always mulligan Patches away and try to dodge drawing him early. Also be aware that in Quest Rogue it is sometimes better to avoid playing pirates early so that there is a chance you can summon two 5/5s with charge as a finisher.

Wickerflame Burnbristle was long one of the most underrated cards in Paladin because in the MSG meta Paladin was generally weak. Now, as Paladin has again risen to the top, he gets the attention he deserves. He is playable in a variety of decks from fast to slow ones, either protecting weak high damage minions or healing up against aggressive decks while soaking two attacks in the process.

Finja, the Flying Star was first scorned for being lackluster, but was redeemed halfway into the MSG meta with the discovery of the “Finja package”: Finja, 2x Bluegill Warrior, 2x Murloc Warleader (plus Old Murk-Eye in Wild). Finja fever has died down a bit since then, but the card is still incredibly powerful.

Aya Blackpaw is an essential ingredient in ALL Jade decks. There is literally no iteration of this archetype that does not run Aya, independent of the class. Her body is rather weak, but by turn 6 she in general brings at least a 3/3 with her, resulting in the Deathrattle to spawn a 4/4. A 6-mana 12/10 does not sound too shabby, right (worst case 6-mana, 8/6) with the added benefit to ramp up the Jade count). 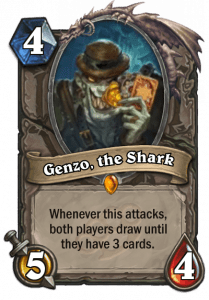 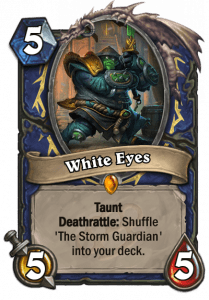 Shaku, The Collector is another of those cards that was laughed at in the beginning. Now, he finds his way in and out of Miracle Rogue lists. He also finds his application in niche decks like Stealth Rogue or even Burgle Rogue. Overall, Shaku is a good card, but by no means essential to competitive Rogue decks. Note: he does not belong in Quest Rogue.

Genzo, the Shark is on the fringe of not being worthwhile. Nevertheless, some pro players swear by him in Aggro Druid lists where he can do serious work for you. Apart from that, he finds little applications in the current meta.

White Eyes. While not a staple in Shaman because of its slowness, White Eyes IS indeed a good card for value oriented Shaman decks. The combination with Ancestral Spirit and/or Spirit Echo is of particular interest as it enables you to shuffle multiple 10/10 Taunt minions in your deck for the ultimate value. Be careful to dodge polymorph effects, though.

Autionmaster Beardo saw some playtesting in spell focused Priest decks, but never made it into competitive lists. He is best paired with Raza the Chained for free healing, but since Reno Jackson is out of Standard, highlander style* decks are not popular anymore. If you are enjoying playing Reno Priest in Wild, you could think about getting Beardo anyway.

Kazakus was a staple and one of the most powerful cards in the MSG meta. Today, he has fallen out of favor because his most powerful ally, Reno Jackson, fled to Wild (compare also with the Raza the Chained paragraph and the one of Autionmaster Beardo). Every once in a while, Kazakus decks pop up in testing and on the ladder,  but they are rare and generally do not make a lasting impact. That said, if you play wild, where Renolock is still Tier 1-2, Kazakus is almost a must have–and so much fun.

Knuckles seemed to fit perfectly to the Hunter playstyle, but turned out to be too slow. His existence in the card pool is a good thing, though, as he can be put to use sometimes when created by Jeweled Macaw.

Raza the Chained. Highlander Priest is the only highlander style deck that sees some play in the Un’Goro meta, making Kazakus and Raza fringe playable. The list players experimented with in the Year of the Kraken were by no means as refined as were Reno Mage, Reno Warlock or even Reno Priest of yore. There is hope for a spell-based list, but as of today, there is no powerful enough list that could lead to a higher craft recommendation. In Wild, this card is very playable and maybe even top tier.

Hobart Grapplehammer was highly overhyped before his release. He turned out mediocre even in heavy weapon based decks like Pirate Warrior.

Seargent Sally. I love the concept of this card. If Grimy Goons decks were viable, this card would have the potential to be insanely good by dealing huge amount of AoE damage to the enemy board. Handbuff does not work though, which renders her useless.

Madam Goya had her brief appearance in some wacky heavy Control Shaman decks. Since Healing Wave is not longer available in Shaman, this type of Control Shaman does not see play anymore. To be honest, the card never convinced a huge number of competitive players in the first place.

Wrathion was not good during the dragon-heavy era of MSG and isn’t today with a lot less dragons available. You might pick him while discovering a Taunt from Stonehill Defender, but only if the other cards are even worse or you are in dire need of an additional card draw.

Don Han’Cho. Grimy Goons handbuff decks never took off and therefore the Don was always one of the saddest cards of the MSG expansion. He has a lot of potential, and even two heads, but no support from either his own set or from Journey to Un’Goro.

Inkmaster Solia is another victim of Reno Jackson rotating to Wild, with the difference that she was already a niche pick in Reno Mage during the MSG meta. Because she was no auto-include in Reno Mage before, she is not essential in Wild either.

Mayor Noggenfogger. This may be the most memed card of the Gadgetzan expansion turning the game into something totally ridiculous. Luckily, this card is total trash besides of the laugh factor and was not viable in competitive decks.

Krul the Unshackled is comparable to Inkmaster Solia. The gnome was never essential in Renolock and lived a niche existence in Demon Renolock. Therefore, the same holds true for him that he is not worthwhile in Standard today and not essential in Wild either, though Demon Renolock has some good tools over there.

Kun, the Forgotten King. He was once part of one of the most feared combos in Hearthstone alongside Aviana. These two cards together with either Malygos or C’Thun enabled Druid decks to have huge OTK burst damage. Aviana is gone and so is Kun in the Un’Goro meta. In Wild, he is still perfectly viable.

*Highlander decks are decks with a single copy of each card rather than double copies. These decks lose regarding consistency, but have the benefit of enabling effects of cards like Reno Jackson, Kazakus, Krul the Unshackled, and Raza the Chained.

For those new to the game and playing Standard, there a less need of Arcane Dust than you might think for catching up. There are only a few Legendaries that are essential in the Un’Goro meta. Those four, though, are almost omnipresent which make them a must have if you plan to build a tournament line-up. Otherwise, it depends on the decks you want to play or already have the cards for, which might result in you needing just one or maybe two of those. On the positive side, I think that the four top Legendary cards will stay in the meta this year, making them a good investment in the future.

If you feel any card is rated incorrectly or you have any other comment, please let us know in the comment section below or tweet @OtakuMZ and @BlizzPro.