Climbing the ladder in any game is a grueling task and Heroes of the Storm is no different. Many factors halt progress but none more so than personal ability and skill. If a player is lacking the necessary skills and ability for a specific rank then it is simply unattainable. Because of this, an insatiable demand has emerged for knowledge on key strategies to improve a players mechanical skill. Over the course of the next few weeks, aspects of improving personal skill will be released to hopefully assist players on building up specific areas of gameplay. This week the main focus will be on mechanical ability and micro-managing Heroes.

First and most importantly is setting yourself up with a decent Hero pool that you not only enjoy playing but also covers the wide spectrum of roles. The problem many players face is they enjoy a multitude of different characters but never master any of them. It is imperative that you have at least three decent characters of each class to practice, as when it comes time for drafting you have the ability to pull out any of these characters to fill any role comfortably.

One false claim of mechanical prowess is the ability to last hit Creeps. Creeps, also known as minions in Heroes of the Storm, are the Minions that spawn periodically in lanes. Last hitting Creeps is a major facet of the other two popular MOBAs, League of Legends and DOTA, and it has been slowly creeping its way into Heroes of the Storm as well. The difference is that in the other two games, CS or Creep Score, is integral to building your character. You absolutely need it to advance in any way possible. In Heroes, it is an optional side quest on some Heroes. For example, Murky needs to last hit Creeps with his Puffer Fish to get Bribe stacks. Because of this, the last hit mechanical skill isn’t all that important, however, it does lend itself to better ability with A-Moving.

A-Moving, or Attack Moving, is a Starcraft term that exponentially increases a players damage per second by altering character movement. This is performed by clicking the normal move command then immediately following it up with Attack Move command which is normally set up on the A key on your keyboard. This combination is fantastic for adjusting a character’s position without sacrificing damage, getting the most out of your character. Another very important use for this is chasing down low health opponents, maximizing the damage output before they can get out of range. It is important to note that this is mostly useful for attack damage heavy assassins like Raynor, Valla, Falstad but is also useful for any character squeezing out as much damage as possible.

The downside to A-Moving is the awkward hand placement when performing the action. The A key is in a very off position compared to the usual MOBA hand placement, because of this it is highly recommended to change the key binding for A-Move. A lot of prominent Heroes players have suggested changing the key binding to the left mouse button, which makes it easier to perform, however, the original left mouse click function will need to be changed to the middle mouse key binding. This will work, however, it will need some time to get used to. A more optimal position is space bar, the normal function of this is to centre the screen on your character. By doing this it assists with a much more comfortable hand placement and changing the centre screen key binding to the middle mouse button should not impact your game as much as moving the left click key binding. 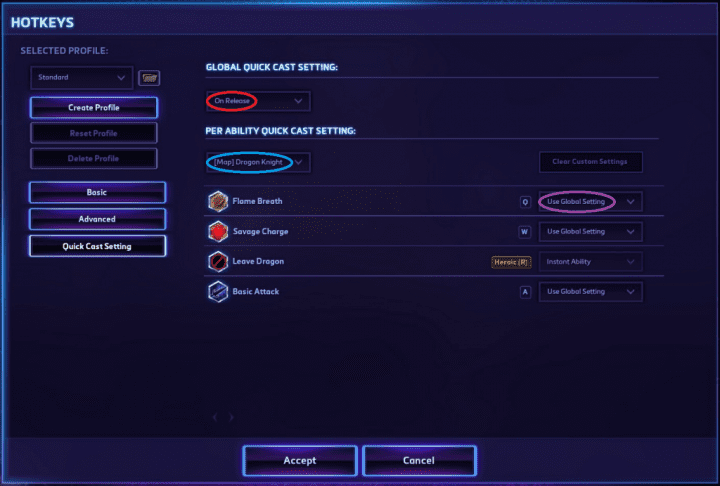 The final lesson to take away from this is quick cast abilities. In other MOBA’s it is almost mandatory to have Quick Cast set on all abilities. This is fine for those games as the developers very rarely have multi-staged abilities. In Heroes, however, abilities with multiple stages is far more common. An example of a two-stage ability is Ragnaros’ (W) Living Meteor/Meteor Shower where the player selects the ability’s starting point then select its direction. Having this on Quick Cast can be difficult as there is no clear-cut sign on where this ability will end up. Fortunately, the Heroes development team have found a way around this by cleverly allowing players to select which abilities they would like to have performed via Quick Cast. Individually selecting abilities to be quick cast may be a painstaking process, but it is by all means necessary to improve gameplay.

Climbing out of the lower leagues is not an easy task. It takes time, effort, training, and incredible patience but it is one hundred percent feasible if the player has the drive to do so. By setting up a solid mechanical foundation practicing A-Moving, setting up Quick Cast abilities, having a solid roster of heroes that the player knows the ins and outs of, achieving that higher ranking should be a breeze. Next week we will discuss the importance of map awareness as well as picking talents to counter the enemy team composition and optimize performance in certain situations.