Welcome to our fifth installment of the Karazhan Card Evaluation, a series in which we review each and every card spoiled before the release of the whole adventure on August 11th. As always we appreciate comments below or via twitter @OtakuMZ1978 and/or @DannyDonuts_HS
Don’t forget, the thoughts presented here are made on what we know already, not what will come. To see how the picture changes with newly released cards please go to the Karazhan Power Rankings. 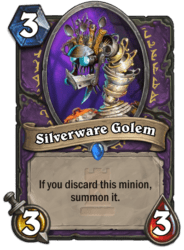 OtakuMZ: Hey, still no dishes tribe. 😉 Anyway this card has a huge potential. It does not only buff already heavily used cards like Doomguard and Soulfire, it also buffs every other “discard” cards as well as synergizes with the new Malchezaar’s Imp. Best case scenarios are outrageously good. I am totally hyped for this card and I hope the discard mechanic finally takes off with these latest additions.
Rating: 1

Danny: Wow, Blizzard is really pushing the Discard Warlock deck. My initial comparison of this card is with Fist of Jaraxxus. Both cards are cards that you want to discard, as their effect upon discard is as if you played the card itself. I feel that blizzard has learned from Fist of Jaraxxus that in order for a card that does something when discarded it must be ok if you have to play it without it being discarded. That makes this card better than Fist of Jaraxxus, playing a 3 mana 3/3 is not horrible, compared to dealing 4 random damage for 4 mana.
Now that this card has been released, I have no doubt that discard warlock will be a viable archetype. There will be a lot of testing in the next few weeks to see which lists are the strongest, and how powerful they are compared to current meta decks. Ultimately I feel that the discard warlock will be good enough to surpass the current Renolock deck, but I am not sure if it will be good enough to be better than the current zoo list, or if it will replace zoo entirely. I feel that it may be on the cusp of tier 1, but if not a solid tier 2 deck.
Rating: 2-3 (A) 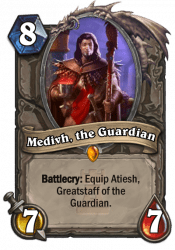 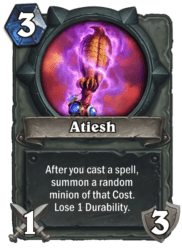 OtakuMZ: Medivh himself… and he brings a fine present too in the form of his Staff Atiesh. The minion stats itself are not really exciting but the staff, oh my dear! You won’t attack with such a precious weapon in hand to hand combat though unless inevitable. Its effect is nothing less than that of a Summoning Stone with the limitation, that it can only summon 3 minions from your spells casted. But let’s be honest, most Summoning Stones did not survive much longer than that anyway, rigth? If you like to get totally over the top, you can buff the staff with Captain Greenskin or, if playing warrior, with Upgrade! or Bloodsail Cultist for even more summoning shenanigans.
I love the card, i have to admit. It is no omnipotent include in all classes and styles as was Dr .Boom, but in more middle to late game oriented decks, I can see him shine. He is also well fitted to be an addition to Tempo Mage, Yogg/Token Druid or other Yogg-Saron decks.  I hope this wizard does not wiff as did some before him (Cho’Gall, Rhonin) and rather rise to a powerhouse as did Yogg-Saron, Hope’s End. Also beware of Acidic Swamp Ooze and Harrison Jones. With the prevalence of weapon classses in the actual meta this they could evolve to a staple nonetheless.
Rating: 2 (fueled by a lot of hope and hype)

Danny: Medivh is the second card that allows for all classes to be able to get a weapon, after Blingtron 3000 did in GvG. Atiesh is not any normal weapon however, it has the Summoning Stone effect. This is actually really powerful, as unless your opponent is running weapon removal, you are guaranteed three activations of the Summoning Stone effect, which is actually really powerful.
The real comparison that needs to be made is with Yogg-Saron. Both interact with spells, and are large late game threats. Medivh can be played earlier, and get value out of his weapon before turn 10. Yogg seems more powerful if you are behind, as his effect is more instant, and tends to clear the board rather than put minions on your side. That makes me feel that the decks that want to run Medivh will have to contest the board much more than yogg decks currently do, and cannot use him as a comeback mechanism as much as Yogg is currently being used.
This card will fit into slower value seeking decks that run a lot of spells. In my opinion, most decks that ran Yogg, could try to find a place for this card, either in place of Yogg if the effect ends up being more powerful than Yoggs (Which I doubt), or even used together in the same deck. The current decks where this could happen are Tempo and Reno Mage, Token Druid, and Lock and Load Hunter.
Looking at these decks, I feel that Medivh is a bit slow, and in the current meta would probably not see too much play. However, the release of the expansion will inevitably bring an initial slow down in the meta, which will make this card very powerful. After the first few weeks of the adventure however, I feel that Medivh will be too slow. You need to be able to contest the board up to a point where you can waste your whole turn dropping a large minion that has no immediate effect, and not get killed after he is played.
However, if Medivh gets played excessively, weapon removal will almost be mandatory when creating a deck due to all the powerful decks that currently have weapons, as well as now having a neutral weapon.
Overall I think the card will be experimented with for a while after the adventure is released, and it may find a niche deck that uses it to its full potential. However, the power level of this deck will not be game breaking.
Rating: 2-3

This concludes our rather short today’s review. I think we can expect the remaining cards being spoiled shortly after tomorrows official stream. If you lived under the rock for the last days and do not know what I am talking about please follow the link. Don’t forget to check out the links below. Until the next time in Karazhan!