The Hearthstone subreddit is going wild on speculations once again, with the upcoming announcements of March 11th only a couple of days away. This time, a post by PlayTank quotes a 4 month old reddit post by KarbyP from a japanese site. By accidently quoting voice-overs of possibly new cards it previously predicted some LoE cards right: Arch-Thief Rafaam, Elise Starseeker, Ethereal Conjurer, Museum Curator, Naga Sea Witch and Chieftain Scarwash (LoE Boss). The rumor is, that we might see new alternate hero skins for Paladin, Priest and Rogue by Lady Liadrin, Tyrande Whisperwind and Maiev Shadowsong respectively.

I dug up alternate hero portraits on hearthpwn  to give you an impression what they might look like: 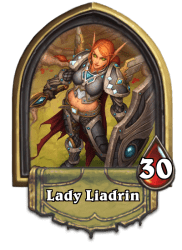 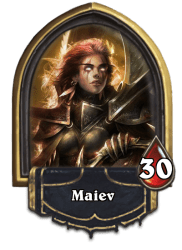 Fullas Games already published a vision of how Tyrande and Maiev may look like:

There is still room in the post to speculate about new cards that we might see in the upcoming spring expansion:

For Captain Scaleblade, a 7-mana 4/6 warlock Card, there is an existing card yet which you can see above. According to Ben Brode it was cut from TGT for balance reasons. Speculations are, that there might have been overpowered or even totally broken interactions with either Naxx or GvG Cards.

LFP Gaming spotted this first back in November and made it public by a YouTube video. As I said already in my last post: the hype is on! I will get new informations to you as soon as I find them and am able to post them.