Every week the pros from team Fade2Karma break down the “Deck of the Week.” These decks are seeing a lot of play either in constructed ladder or tournaments. Team F2K explain the deck lists and how to play them. View past Deck Lists of the Week.

The meta has been the same this past few weeks. You will notice the same decks are being played like Freeze Mage, Renolock, Secret Paladin and Tempo Mage. Today, I take you back to 2015 with Deathrattle Rogue! This type of Rogue has solid midrange power that has a super sticky board.

The whole list revolves around Unearthed Raptor: it is the only reason why you play this deck. It has the stats of a Spider Tank which can copy deathrattles of your minions on board. It is a really good card, maybe the best 3-drop in the game. The value of the card depends on what deathrattle you would give it. As for this list, the worst you can get is having two 1/1 Spectral Spiders. A 3-mana minion with 3/4 stats that gives you two 1/1s is above average; the card is good!

The trick of the deck is getting a 2-drop and the Raptor for a great early game. Even we play Abusives, we are not an aggro deck; I suggest you throw it away on your mulligan if you don’t have good cards to start with. Don’t worry, you’ll definitely get your 4-drops later so don’t you dare keep one without good cards (especially without coin).

The deck also encourages minion trading. That’s why I added cards like Abusive Sergeant instead of Cold Blood just because of the extra body you get. This list is proactive! You better don’t lose the tempo. 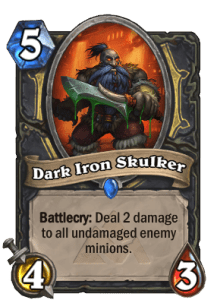 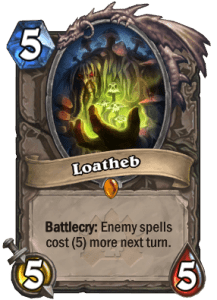 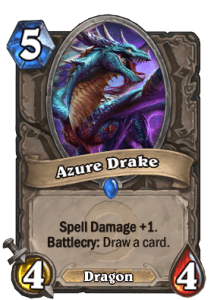 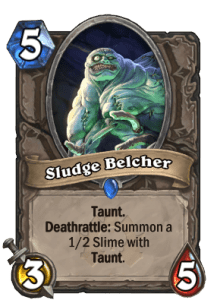 There are a lot of 5-drops that are really good for this archetype, but there are limited slots cos we want the curve to not mess us up. You don’t to get these cards early on that’s why there is a finite number of cards you can fit in this slot. In my opinion, Azure Drake is a must keep: it gives you card draw which is really good and also buffs spells such as Backstab and Fan of Knives. Sludge Belcher is also good as it fits the theme of the deck; a Raptor getting slime is not bad at all. Loatheb acts as a secure-the-win kind of card; it’s also a perfect fit in midrange decks! Dark Iron Skulker might be one of the most underrated cards in Hearthstone: it is a Consecration with a 4/3 body! Try experimenting with different combinations of these cards as you please, see what you are comfortable with.

Some will see this list and go, “Why are you even playing Gadgetzan Auctioneer?” Gadgetzan works as our Sprint! I have 2 coins on average, sometimes you get it from Tomb Pillager or you copy its deathrattle with Raptor. You can definitely get value from it even though we are not running much spells at all. It’s a comeback tool for the times that we lose so much steam. And most likely you get to play another minion on the same turn, not bad at all!

I have been playing this list on an aggressive meta and it has been working well. The decks you want to avoid are the really controlling ones. Freeze Mage and Renolock are tough to play against but with the help of the deathrattle minions we have, I manage to get wins sometimes.

Though we lack the burst that we need to close out games, we can get a lot of damage in the midgame. That’s why I made this deck more aggressive with proactive minions; you can trade/clear board while getting much damage to the face. FACE IS THE PLACE 😆

Deathrattle Rogue has been my main deck to climb this season’s ladder. I really hope you try this deck; I always have a good time playing it. If you want to see how I play this deck, you can catch me at https://www.twitch.tv/chalkhs. Don’t forget to follow me on twitter @F2K_Chalk; I always tweet before I start my stream. That’s it for now. GLHF!