Every week the pros from team Fade2Karma break down the “Deck of the Week” . These decks are seeing a lot of play either in constructed ladder or tournaments. Team F2K explain the deck lists and how to play them. View past Deck Lists of the Week.

For the longest time, Hunter has been one of the strongest classes in the game. Its hero power enables the players to be aggressive most of the time. The other two archetypes (Face, Hybrid) go for plays that hit face most of the time allowing the opponent to trade with the board, while Midrange fights for early board and going aggressive in the midgame. What I love about this archetype is that it is more flexible, and it has more room for you to include tech cards. Midrange Hunter has not seen much play recently due to the popularity of Patron Warrior, which is a tough matchup for the class. Now that the Warsong Commander nerf is just days away, the deck will certainly rise to the top once more.

I have been playing Midrange Hunter for quite some time now and I’d say it’s one of my favorite decks. Even playing underrated cards like Oasis Snapjaw and Stranglehorn Tiger back then, the deck seems unstoppable. And after the release of Naxxramas, Midrange Hunter became even stronger with additional cards like Webspinner, Haunted Creeper, Mad Scientist, Loatheb and Sludge Belcher. Though it seems that after Naxx, Hunter didn’t get much cards to include; there really are few slots to fill.

There are a lot of new cards given to Hunter as TGT was released. I tested a lot of them and made new lists, and I feel like the old cards are simply better. 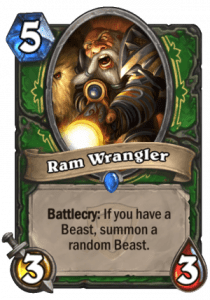 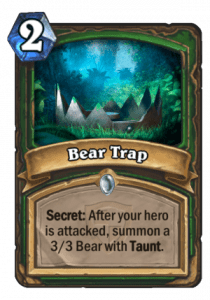 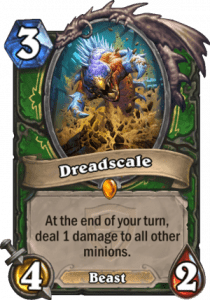 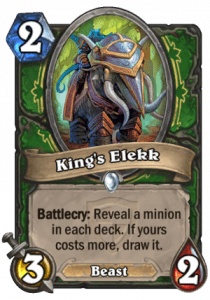 Some players include this on their midrange list arguing that Elekk is good against slower or control decks; it is not. You simply won’t win the joust having so many 2-drops. Why haven’t we seen Bloodfen Raptor in play? A vanilla 3/2 simply won’t do, and that’s what King’s Elekk is.

There are limited cards in the 5-mana slot, and I really like playing one 5-drop because you play your turn 5 most of the time by disposing your 2 and 3 mana cards just because you have so many. Ram Wrangler needs you to have a beast on board, which is sometimes hard to do on 5. The average beast you get from wrangler isn’t good enough to make it a 5-mana minion. I feel like Loatheb is just better; you block spells on 1 turn and it’s pretty good setting up the Highmane for turn 6.

Playing different traps will definitely confuse some of your opponents. A 2-mana 3/3 isn’t bad at all. I think it’s a must play with Snake Trap. I’m playing 2 Freezing Traps just for consistency.

We’ve seen some lists running this a few weeks back. Dreadscale is mini Geddon that is pretty good vs Muster for Battle. Since there a lot of Paladins lately, there is a big chance that this minion will see play. Unleash the Hounds is still better for the spot in my opinion.

If you have played this deck a zillion times, you’ll find that the strength of the deck comes from curving out well. Currently, I am playing five 1-drops. It allows me to get early board minions, which is pretty good, and fill in my mana curve well in the upcoming turns. This means that if I don’t draw perfectly into a 4-drop for example, I can fill it up with a 3-drop and 1-drop. Also, the Abusive Sergeants enables me to get better trades and maximize damage.

I think Boom is an okay card to fit in Midrange Hunter. Heck, some players even play Ragnaros with it. It all depends on the meta. If it’s running really slow, Boom certainly is up for consideration. Unfortunately, the death of Patron Warrior led to an aggressive meta, so no Dr. Boom for now.

I play a lot of minions in my midrange lists because board presence is very important. I like keeping my spells and weapons on a few number, to ensure that I will draw well. Curving well is a big deal in this game and especially with this deck. I think not a lot of players are considering this when building decks.

What cards do you run in your Midrange list? Why do you play them? What are they strong/weak against? These are some of the questions you need to answer when you build your decks. Til next time! Be bold, be brave, and always have fun!

I appreciate the time you put in reading my deck guides. I hope these help you in understanding the deck archetype more and give you better win rates. Again, my name is Chalk from Fade 2 Karma. Support me and my team by following us on twitter @F2K_Chalk @Fade2Karma.  I also offer coaching so hit me a direct message if you are interested.

0 responses to “Fade2Karma Deck of the Week: Midrange Hunter”