While a lot of people scream for nerfs when cards feel overpowered, I don’t see many people calling for buffs to long forgotten cards. In my competition-based mind, every non-joke card should at least be a decent fit in a viable deck. Just ignore the fact that bad cards do have a few purposes in the game, ok? Still, I believe the meta would grow a lot more interesting if a wider array of cards suddenly started seeing play. So without further ado…

Welcome back to Mending Mondays, a weekly feature where I, Dannie “IAmDiR23” Ray will take a look at some of the worst cards in the Hearthstone and evaluate why they are deemed to be horrible, and what could be done to fix them.

WARSONG COMMANDER HAS BEEN NERFED?! pic.twitter.com/pVdeqYawea

Warsong Commander got nerfed, again. Except this time it wasn’t just a nerf, it was a complete redesign. But it wasn’t just a complete redesign, it was changed into what’s essentially a completely useless card. I understand with some of the reasoning behind the Nerf, but I can’t say I agree with all of it. On this somewhat special edition of Mending Mondays, I will look at both the Old and New Warsong Commander and see if we can actually do better.

“Your Charge Minions have +1 Attack.”  That’s a cool ability, its the kind of ability that can guide a player into making a deck. I love the idea of a card that boosts the attack of an specific subset of minions, and everyone knows that Charge Minions love their attack. So what’s the problem here? Well, its the statline. A 2/3 for 3 Mana is abysmal, you need a borderline gamebreaking ability to make a 3-mana 2/3 minion worth it, and  “Your Charge Minions have +1 Attack.” is a cool ability, but it isn’t that strong. 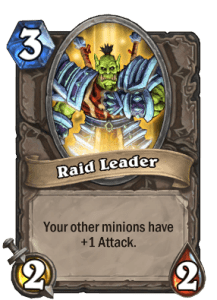 Yeah, you’ve all heard it. The new Warsong is just a worse Raid Leader. You’ve probably heard it because it is true. In a dedicated deck, its only marginally better than a card that already sees no play. FeelsBadMan!

“Charge Forward”, This card Heart has always been about allowing your other minions to charge. Sadly this mechanic is way too strong to keep unchecked, and restricting this mechanic is a bit complicated for a basic card. Ben Brode already explained why giving other minions charge is something that can be problematic (think Dreadsteed), and I agree, I think giving extra attack to charge minions is a good compromise for a basic card, so we are pretty good there.

Where I disagree with Ben, is on maintaining the 3-mana 2/3 body on the Warsong Commander. When it comes to keeping the integrity of the card, I don’t think the statline is very important here, as long as the Warsong Commander is still an early minion, we should be good to go.

“Your Charge Minions have +1 Attack.” Isn’t a game changing ability, this means that you need your minion to at least pass the Vanilla test. a 2-mana 2/3 would at least be an arena card. Having Wolf Rider, Arcane Golem and Argent Horserider as follow ups next turn makes it very interesting. Coin + Korkron Elite is also an option. 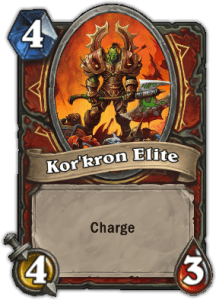 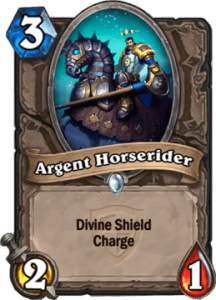 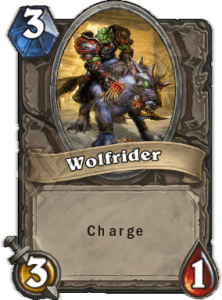 Another option would be raising the buff, maybe a 3-mana 2/3 could be a thing if it gave at least +3 Attack. Perhaps you could do something with Raging Worgen + Charge + Warsong Commander?

Well, first thing first you have to limit the amount of minions that you can give charge to. Giving charge to all minions is super abusive as you could see in the old Molten + Pandas OTK deck. More recently this was showcased by the Grim Patron spam. 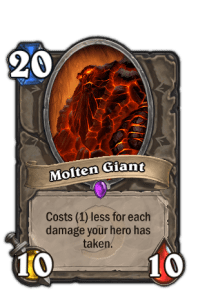 Old versions of cards make for some broken combos huh?

We already have a spell that gives other minions Charge, so giving Charge to a single minion seems ok. Perhaps if we can limit the charge giving to a set amount of minions, we could actually keep the original spirit of the card. 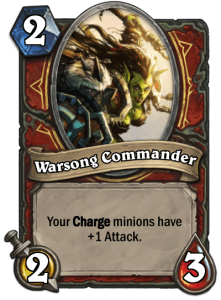 We’ve already talked about this earlier. This is just a solid minion that can be actually picked on arena, it might even be good enough for some sort of budget charge deck that a new player can try to assemble. 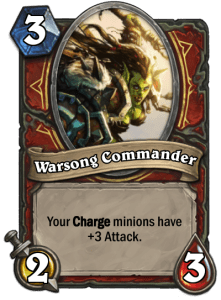 This is a more combo oriented version, it’s probably not going to be good at all in arena, but the ability looks eye-popping. +3 Attack is a very considerable amount, and I think something like this will definitely get people at least trying to get it to work. Plus, this version keeps the original stats of the cards, if you are into that. 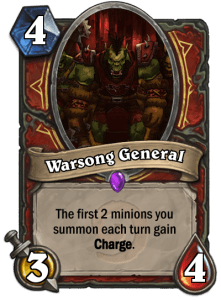 Giving other minions is maybe too complicated for a basic card, so why not make a different card to fill the role of the old Warsong Commander? The first decision is making the card 4 mana to limit its potential against abusive combos. Then you have to look at the wording, much like the Pint-Sized Summoner, it doesn’t fully work the first turn you play it. As its ability is not active when you are summoning him, he should not give himself charge, although he might end up boosting himself as I’m not 100% sure on the order in which abilities resolve in Hearthstone (wtb comprehensive rulebook).

This means that the Warsong General would only give Charge to one minion, but just like the old Warsong, he is a high priority target as next turn he can unleash its full power by giving charge to 2 minions. His statline is not stellar, but he’s probably sturdy enough to threaten some of the early/mid game cards.

Do you think this is broken? Too weak? Let me know what you think about these 3 cards using the comment section below, I can’t wait to read about your versions of Warsong Commander and the cards you’d like to see made in the future!

Can’t get enough of Mending Mondays? Check out all past editions here! Want to give your Hearthstone Brain a workout? Maybe try my weekly puzzles. Just want to laugh to funny stuff? Take a look at these hilarious Lifecoach reactions.