Nefarian really, really loves experiments—specifically mad experiments. He loves them so much that he’s had himself re-animated and is now back from the dead, fully ready to resume his twisted work. Join Dannie Ray as he takes the role of Dragonman Maloriak, assisting in the design of some quite twisted Hearthstone cards that are bound to break the game in one or more ways.

Welcome back to Nefarian’s Laboratory! It is good to see that you couldn’t stay away, I hope you are happy with what we last created for you. Today, we are going to take a look at one of the new mechanics introduced with The Grand Tournament, the fine art of jousting. Joust seemed like a very interesting mechanic, but sadly it hasn’t really shaken up the meta, only a few Jousting cards made their way into competitive decks, and the impact of these cards has paled in comparison to what cards like Mysterious Challenger and Darnassus Aspirant were able to achieve. 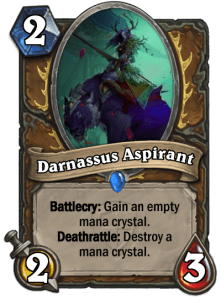 It is a bit disappointing that Joust didn’t live up to its potential, because it’s actually a pretty interesting mechanic. Take for example what top 10 EU player Crane333 said about Joust:

“I had high hopes for jousting since the mechanic in some ways is awesome because it offers information about each others decks/hands which will always favor the more skilled player. The problem is that almost all the joust cards suck”

That seems extremely Harsh, but I can’t fault Crane for feeling that way. But why isn’t Joust a bigger deal? To truly understand this mechanic, we have to look at the cards that make use of this new mechanic. 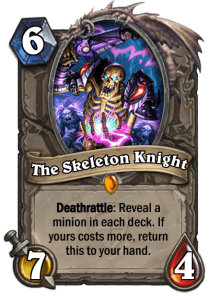 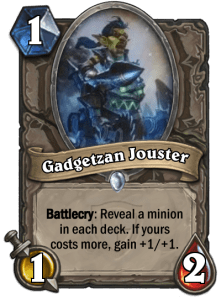 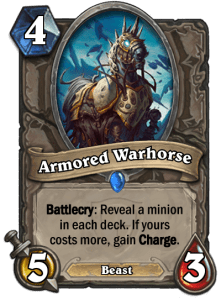 One of the biggest problems of Jousting comes not from the mechanics, but from the cards that use it. Just take a look at the 4 cards above and tell me how bad are they when the Joust ability doesn’t trigger.

If you are in a position where you need a taunt, you probably can’t afford to spend 6 mana and not get a taunt. Maybe you need those last 5 points of damage for Lethal,but your Warhorse misses and you lose the game because you went all in. Perhaps your Gadgetzan Jouster needed to stabilize the early game for you, but he whiffed and now the game spiraled out of control.

These cards are huge liabilities, and they’d need to have truly game changing effects for them to be considered for serious competitive play. The problem is, if they are this bad when the ability doesn’t trigger, and are also godly when they wrok, then games start being decided by the coinflip of the Joust, which isn’t really ideal. 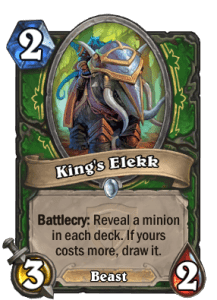 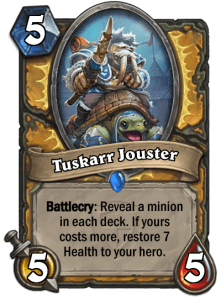 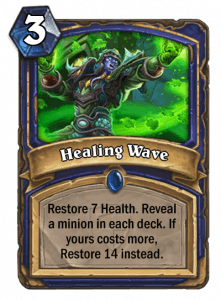 But Joust isn’t completely dead in the water, you have some cards that have actually found some kind of place, or at least they have attracted more interest from deckbuilders. What do these 2 minions have in common? Well, for starters they have decent stats for their cost, this means that even if their ability misses, you are not going to fall that far behind. Sure, you probably are going to wish you had a Knife Juggler or a Loatheb instead, but at least these two will probably get to trade fairly.

Despite its decent statline, King’s Elekk hasn’t been that great, mainly because Hunter decks tend to curve lower. On the other side, Tuskarr Jouster is probably the strongest of the Joust cards, because of how it interacts with your opponent’s deck.

Compare Tuskarr Jouster with its closest healing alternative, the Antique Healbot. The heal is probably more relevant against aggressive decks, and when you are fighting lower curve aggressive decks the Joust ability is way more likely to activate. This makes toothy friend a valuable card against Aggro. Against slower decks, perhaps the healing is less relevant, and you won’t hurt that bad if you missed the joust. To compensate for that, the 5/5 body is much more likely to make a difference on the board. This balance of effects makes the Tuskarr Jouster a very flexible card, a good alternative that makes a strong argument for inclusion in slower decks where you might want to fit in some healing.

The same logic applies to Healing Wave, restoring 14 Health can very well give you the time you need to shut out an Aggro deck, a card like this shines in a pure control shaman, like the one we featured not long ago on the site.  Perhaps Healing Wave is not going to become a staple on Shaman lists everywhere, but the card at least has a place where it can be used to great effect.

But not everything is about the cards, there’s also an inherent issue with the jousting mechanics. Lets say you have Joust cards that are strong enough to warrant inclusion in an Aggro-heavy meta; as more and more players include this cards to punish the faster decks, Aggro falls out of favor, and the Joust cards start to lose value. If the meta slows down, maybe the Joust cards aren’t worth using anymore. As the players start to drop these Joust cards from their decks, maybe Aggro starts to get popular again, rinse and repeat ad infinitum.

This is why creating Joust cards isn’t exactly easy, in order for them to be truly effective, they somehow need to be worth it regardless of the type of deck you are facing against. If Blizzard truly wanted to slow down the meta, perhaps having truly powerful Joust cards is just what the dragon ordered.

When pushed to the edge, results may become unpredictable!

Here is where Nefarian’s Laboraty kicks in. Let’s create really, really strong and interesting Joust cards. Perhaps these can even feel overpowered, or maybe they can suck, but you can always change around the mana costs and stats until they are in order. I’m not going to worry THAT much about balance, instead the main focus of our efforts are the core concepts, we want to explain why these would help Jousting decks become a thing. 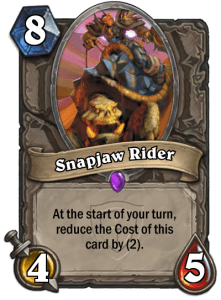 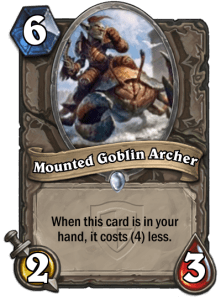 One of the problems with Jousting is that sometimes your early and even midgame minions can be a liability, maybe Joust decks need more cards which allow them to have smoother curves without decreasing the chances that they lose jousts. The Mounted Goblin Archer is a sub-par two drop, but it might win you plenty of jousts. The Snapjaw Rider is a terrible card when you are down to top deck wars, but should work well in slower control decks, a 0 mana 4/5 is something that can potentially be very strong and the 8 mana base cost will help your jousting efforts a lot. Plus, these two have sick synergy with Holy Wrath, if that ever becomes a thing. 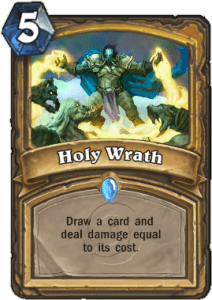 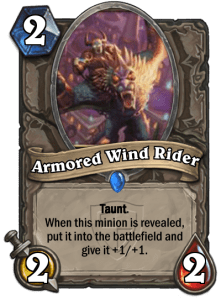 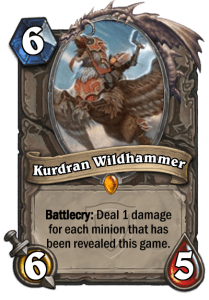 Everytime you play a joust minion, both you and your opponent reveal a minion from your decks. But what if we can do more than just reveal them? Losing a joust will always suck, but maybe it will be better if you can get a free 3/3 taunt for your troubles. Just like the Goblin Archer, the Armored Wind Rider is an early game minion that you won’t be that sad to see revealed by a Joust. On the other side we have Kurdran Wildhammer, who is basically a Fire Elemental on Steroids, or at least it is when played in a joust-centric deck. Theoretically, you could play nothing but joust minions and have this deadly gryphon rider one shot your enemy, so this probably needs some heavy balance testing first. In any case, the idea is to have a card that rewards you for repeatedly jousting your opponent. Also to consider, these two could potentially be used to tech against Jousting decks, perhaps you could tweak the wording to remove that possibility. 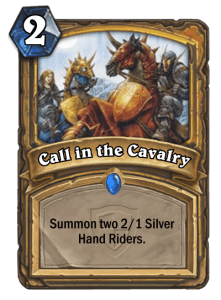 Maybe you just want cards that allow you to build board presence early, without having low-cost minions be a liability to your jousting efforts. Maybe more minion summoning spells can help Joust become stronger. 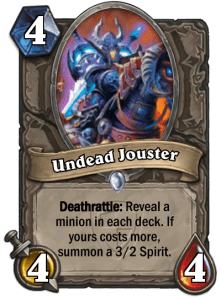 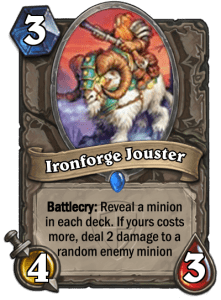 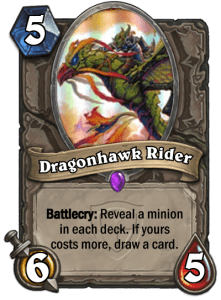 I heard you like Piloted Shredder, so maybe we should try and have something similar. These cards are pretty straight forward, they have decent stats and strong effects, although the balance on these is probably way off. If you adjust their stats and the strength of their power, you could end probably end up with cards that would be very welcome on jousting decks.

What do you think about Jousting? Do you like the mechanic? Do you like the cards I suggested? Let me know using the comment section below, also tell me which changes would you make to these cards so they are properly balanced, and don’t be afraid to suggest your own!

0 responses to “Nefarian’s Laboratory #2: Why wasn’t Joust a bigger deal?”