From 1 to 10, how good is the pro Hearthstone scene? The fairest way to determine this is rather simple: just take a 10 sided-die and roll away!

Hearthstone eSports is one of the most interesting phenomena I’ve come across. A lot of opinions have been presented on the subject; personally, I’ve read countless blogs, forums, social media posts, etc. So what’s the consensus then? Well, it’s a bit hard to say. The community seems to be pretty split, and there are two main opposing opinions.

One one side you have people praising the quick growth of Hearthstone eSports, pointing at the sizable prize pools and great audience numbers that the biggest tournaments are producing. I mean, its hard to argue against the genius of the Archon Team League Championships. You can see for a fact that the Hearthstone eSport scene is doing quite well for itself, and looking at these facts is easy to assume that Hearthstone eSports are in a great place. But is the scene growing because how good of an eSports title Hearthstone is, or is it succeeding in spite of Hearthstone’s deficiencies?

To dig deeper on this subject, we have to look at the fundamental flaws in Hearthstone as an eSport, the most egregious one being the high variance introduced by newer cards. For players who are playing professionally, it’s extremely frustrating to drop games and even tournaments because of terrible draws, unpredictable Piloted Shredder drops, or insane Boom Bot RNG. While the luck of the draw is an integral part of the card-slinging experience, those at the top of the food chain would probably prefer that the games are completely decided based on their skill, rather than allowing RNG to be jury, judge, and executioner.

To be completely honest, the impact of RNG in Hearthstone is often overstated, and unlike the memes would suggest, pro-Level Hearthstone does require significant skill. But why does RNG always come to the discussion as a huge taint on pro-Hearthstone’s merits? Well, the answer is probably multidimensional, but lets take a look at the most important factors: 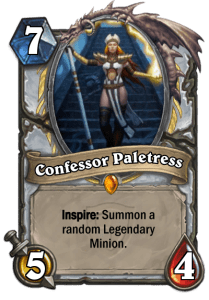 The blame RNG and Hearthstone is a joke culture isn't helping you pros in terms of longevity. You act like winning is happenstance.

“As a player I take the game on a professional level seriously. I do not demean the game with talk about “RNG” or skilllessness. The blame RNG and Hearthstone is a joke culture isn’t helping you pros in terms of longevity. You act like winning is happenstance. People love watching people do things they are good at. When you continuously throw HS under the bus what do you think happens? The quality of viewer decreases. The number of viewers decrease. What you do now becomes a joke. Jokes get old. To be clear it isn’t helping ANY player, pro, semi pro, w.e you want to list yourself as. Its an unattractive part of the HS culture.”

To be honest, his assessment is pretty spot on, and there isn’t much to add to it – but it begs the question, why would the pros create such an environment? Is it just some of them being short-sighted? Perhaps it’s players taking a joke too far? Or could it be that there is some truth behind these claims that competitive Hearthstone isn’t as good as a discipline? Could the frustration of the players wanting more out of Hearthstone be the source of them lashing out at the design?

If you continue to read Th3Rat’s rant, maybe there is something to it.

“A final thought. How can I even be mad at Blizzard? They see where the viewers go. They see what the viewers ‘like’. They are a business who has a goal of making money. I’m not here to argue that this is or isn’t their only goal. Just that most players don’t facilitate a competitive community that demands to be taken seriously or has a reason to be. Blizzard has no reason to believe that catering to competitive players is advantageous for growth given the numbers within HS streaming. Yet outside of Hearthstone you see plenty of reasons to cater to the competitive community. Look at other games. THAT is the potential. So yeah, I can’t be mad at Blizzard; they are a business and what they are doing makes sense given all the measurable logistic parameters. At the end of the day though… Players help dictate some of those parameters. And honestly we are doing a poor job.”

You can make all the arguments you want on how the random effects on Hearthstone make the game more interesting, that the variance adds replayability and makes every match something different. You might even be right in your argument; the randomness of the game has surely helped to propel it to be a huge hit, with millions and millions of users, one of the most-watched games on Twitch, and moving very good money for a scene that is around 2 years old. However, there is no denying that the dominance of random effects is in fact a detriment for competitive play.

Imagine you are playing a game of soccer, but instead of allowing your team to pick who is going to kick free kicks, corner kicks, or penalty kicks, you randomize it. Sure, it might be super fun with your friends, and that 1/11 chance of having your goalkeeper have to race across the field because he was randomly selected to kick would probably make for fun moments, but good luck trying to sell Fifa on that being a good idea for competitive play. Maybe we could have the 3-point line in basketball be dynamic, and having it grow and shrink randomly; that sounds like fun, but doesn’t seem very fair either.

So, How Good is the Pro Hearthstone Scene?

Despite all the randomness, the Archon Team League Finals managed over 140,ooo concurrent views in Twitch, beating out the previous 135,000 viewer mark set by the 2014 World Championship. But would Hearthstone be even bigger if the game, or at least some of it, was tailored towards the pro-scene? It’s hard to tell, but let’s look at Starcraft 2. At least a part of the ATLC finals went head-to-head against the WCS Season 3 finals. These days, Starcraft 2 boasts only a small fraction of the playerbase that Hearthstone enjoys, and if you check Twitch audiences for non-tournament play, Starcraft’s numbers are significantly smaller. Yet when both were head-to-head, Starcraft put up a very respectable 40,000 views, against the roughly 60,ooo that ATLC had at the same moment. It might be a coincidence, but after the Starcraft games ended, ATLC’s audience increased considerably, finally peaking at the record-setting 140,000 that was discussed above.

Sure, the comparison might not be fair, as Starcraft is a storied title with a tradition of eSports behind it; but just look at the ability that Starcraft shows to spike its viewers for big events; look at how a game that is trending down in popularity is still able to call in the masses for high level competition. That’s the power that having a game that caters to its Hearthstone audience has; that’s the power of having a game where the skill of the players is so evident and undeniable; and perhaps that’s the potential that Th3Rat and many other feel is still untapped.

Can the polish and high level of skill-based competition of storied eSports titles like Counterstrike and Starcraft be replicated by Hearthstone? Can that be combined with the huge and still-growing popularity over our beloved card-slinging game to create a true eSports titan? Let me know what you think using the comment section below.

What? You can’t get enough of Hearthstone eSports? You might want to read about why HPL wasn’t as successful as it could have, or perhaps you might prefer to know why Hearthstone isn’t really professional eSports. How about these 5 mind-boggling facts you just won’t believe about Cardstone (Kappa Warning). Stay tuned to Blizzpro, as soon enough I’ll be talking more about the Hearthstone eSports scene, and what can be changed for it to reach its full potential!