Funny story about Fencing Coach, when the inspire Mechanic was just revealed. I mentioned that a lot of the inspire effects felt too slow, because using a lot of Hero Power was too big of a tempo loss. And that for Inspire based decks to become a thing, I would like to see cards that allow these types of deck to make up for this tempo loss, what I suggested was strikingly similar to Fencing Coach.

@Agonumyr @NebtuneFGC imagine something like this, 3 mana, 3/2, Battlecry: your next hero power costs (0). Just don't let Hunter touch it.

But that doesn’t really make me a genius or anything, at lot of people probably came to the same conclusion. I talked to RDU from team Nihilum and he told me that he had also suggested the same Fencing Coach mechanic, he just had the card pegged as a 2 mana 2/2.

Of course, both my version and RDU’s version are strictly stronger cards than Blizzard’s version, but how good is this Fencing Coach Fella? 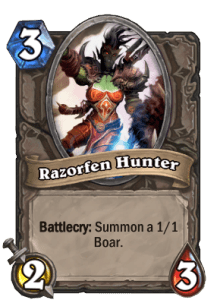 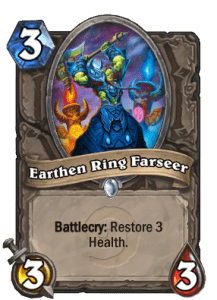 How are these three cards related to Fencing Coach? Well, its simple. If you play Fencing Coach and Hero Power on mage, you get exactly an Ironforge Rifleman. If you do the same with Paladin you get something very close to Razorfen Hunter, and with Priest you have an strictly worse Earthen Ring Farseer.

If we accept that all Hero Powers have similar value (which is highly debatable), we can tell that playing Fencing Coach and immediately using Hero Power is kinda like having a very weak card in your deck. Ironforge Rifleman doesn’t see play at all, while Farseer is a lot stronger than Coach + Lesser Heal.

So Fencing Coach by itself is a rather weak card, but it would be very wrong to dismiss him because of that. For example, in mage, Fencing Coach has two advantages over Ironforge Rifleman. Imagine you have 3 mana on an open board, you are in a matchup where tempo is important so you decide to jam your three drop into the board. Ironforge Rifleman would be forced to go face for 1, while Fencing Coach saves that 1 damage until you really need it. Sure, this advantage is rather small, but the second one is what makes the Coach an interesting card. 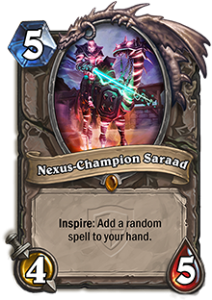 You are not just saving 1 point of damage, but also an Inspire Trigger. Lets say next turn you coin out a Nexus Champion Saraad, and use your free Hero Power to get a spell, that’s a lot of possible extra value generated by Fencing Coach.

Personally, I’m torn on the design behind cards that have synergy based value.  I love those cards with very unique effects that might be awful on their own, but can be extremely potent when played in combination with the right cards (Think of Ancient Watcher, Hobgoblin,  or Grim Patron). But I hate those cards with really unique effects that range from awful to bad when played on their own, and are “decent” at best when played in the right deck (Cards Like Nozdormu, Majordomo Executus). There’s also another type of card that I absolutely adore, and those are the ones that are decent on their own, but can really shine with the right combos (Frothing Berserker, Auchenai Soulpriest, Nerubian Egg). 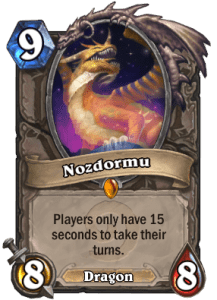 But in which category would you put the Fencing Coach? Are the inspire synergies that this card opens enough to make Coach a great card? Or will this end up being another Card that you really want to use because of its unique ability, but it the end it isn’t good enough to warrant its inclusion? We already saw that as a 2/2, Fencing Coach is mediocre when played on its own, but how much value can he provide when combined with powerful Inspire Cards such as the Murloc Knight?

Let me know what you think of the Fencing Coach using the comment section below. Do you think Fencing Coach should have better stats to be competitive? Could a 3/3 Fencing Coach make more Inspire themed decks to be top tier in the meta?

0 responses to “Mending Monday Specials #1: How good is Fencing Coach?”