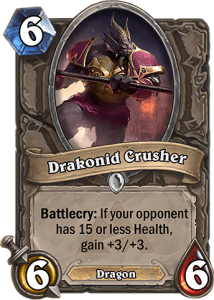 Echolocate (1): Equip a weapon that grows as your opponent plays cards. 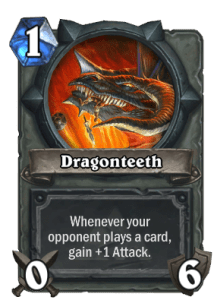 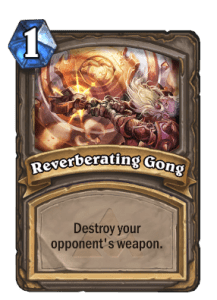 This encounter is pretty straight forward, he starts with a 0/6  weapon that gets +1 attack every time you play a card. Having Weapon Destroy and Freeze Mechanics felt like a no brainer, but honestly they are not needed in Normal Mode as he provides you with some spells that allow you to clear his weapon.

Basically you want to take control of the board and have either the Snowchugger or Water Elemental make sure that his weapon is not usable. Then use your myriad of spells to keep control the board as you slowly freeze him to death. Eventually you might find that you have enough burst to go all in, I finished him on Heroic with a Water Elemental Attack + Fireball + Double Ice Lance combo.

Molten Giant is there in case things start to get out of hand but I don’t really think its necessary in Normal. Harrison Jones would be fantastic on this encounter if you have it, perhaps Blingtron can be another good option.

Echolocate (0): Equip a weapon that grows as your opponent plays cards.

How to beat Atramedes in Heroic Mode?

Well in Heroic Mode his hero power is now free, and you don’t get the cool Reverberating Gongs. Now all the Freeze and Weapon destroy tech we added to our deck is going to finally pay off.

This boss likes to go face a lot, so Ice Block + Ethereal Arcanist can completely take over the game. He might think that he’s poised to win the race, but your spells and board clears will make sure that the Ethereal One manages to beat him out. One of the keys of beating him is setting up the board clears, having a turn 6 Blizzard and/or a Turn 7 Flamestrike is key and you might need to reset the encounter to accommodate for those draws. 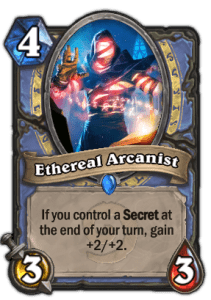 Mulligan for Mad Scientist and Snowchuggers, consider keeping Water Elemental or Flamewaker (but not both) in your starting hand if you get them. 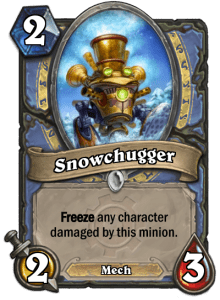 Again, Blingtron, Harrison, and even a second Flamestrike or Blizzard could improve up your deck. A second Ethereal Arcanist also deserves some consideration. After some additional games I thought Arcane Missiles were a bit unreliable and could easily be cut out for better cards. A Second Molten is also an option for Heroic as his weapon and SMOrc (attack face/ignore minions) tactics will keep you low on life.