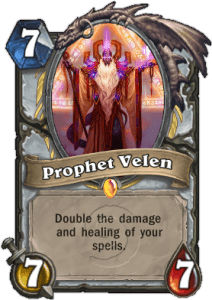 Velen isn’t an awful card, so why is it here? Well, despite not being downright unusable like Magma Rager or Savagery, Velen just isn’t as impactful as other class legendaries. You might be able to make the argument that Velen is worth the card spot in a deck, but justifying the 1600 dust cost is a hell of a lot harder.

First of all, Velen is a class legendary. When you are supposed to spend 1600 dust for a card that can be only used by one class, it better be a really impactful card. Velen’s “good but not great” status really brings him back a few notches, and more importantly the Emergence of Dr.Boom has really made it hard for Velen to see play.

Not only is Dr. Boom better as a 7 drop, but it has also made everyone include a Big Game Hunter on their deck. This ties into one of Velen’s two main weaknesses, the fact that for a 7-mana minion, he is too easy to remove before he manages to net you a nice effect. Almost every minion can be easily disposed of by things like Hex, Polymorph, and Execute, but if you spent your entire turn to put out Velen and your opponent doesn’t just remove it but also gets another threat on the board, the tempo swing becomes a problem.

The Second problem with Velen is similiar to that of Savagery; there just isn’t enough cards that play off Velen. Basically you have Holy Smite, Mind Blast, Holy Fire, Holy Nova, and Light of the Naaru. Maybe include Shadowform there. 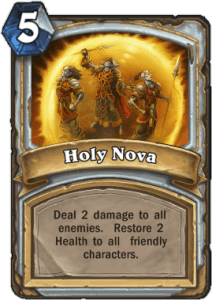 Velen + Mind Blast + Holy Smite can be 14 damage to the face and would be a finisher much like Grommash+Cruel/Whirlwind/Death Bite is for Control Warrior. The thing is that the Warrior doesn’t just pack those cards for their Grom combo, they are all around good for the purpose of the deck. Mind Blast on the other hand is basically a dead card until you are in position to go for the kill.

Now if you manage to get Velen alive for one turn, then you can really turn up the heat with heavier spells like Holy Nova and Holy Fire, but again if Velen survived you are basically staring at an empty board on a game that you should be pretty far ahead on. Compare this to the effect you get from Archmage Antonidas, the mage has a much easier time getting value out of his classic class legendary, and if Antonidas Manages to survive a turn then you probably just got a game winning advantage.

Velen’s ability is super cool and unique. Doubling your damage and healing is just interesting and entertaining. Velen brings a powerful and unique effect to the table, and what likely happened was that the Design team didn’t anticipate that he would be so easy to remove.

First of all, Velen can’t get a reduced mana cost. Imagine Velen + Double Mind Blast. That’s a 20 damage, 10 mana, three card combo that goes through Taunts. That would be a complete pain to go against, and it wouldn’t be hard to achieve in a Control Priest deck. Sure, you can do that right now with a coin, but that’s not really reliable.

We’ve established that Antonidas has the better effect, and the HS agrees by having Archmage pack less stats, ironically enough his reduced stat line makes him stronger as he’s not a Big Game Hunter target like Velen.  As a 6/8, Velen might start to see some play.

Or maybe you can trade off some stats for another cool ability, maybe Spell Damage +1, or a small Battlecry. 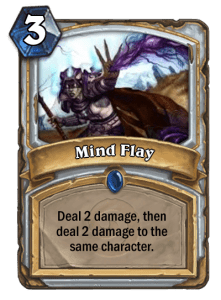 Ok, that’s not a Velen. But is a card that could play of him. This version of Mind Flay might not look like a world beater but it can be played along with Velen on turn 10 to clear a big threat like Giants, Ragnaros or Doctor Boom. It also kills Divine Shield minions like Annoy-o-tron, Shielded Minibot, Scarlet Crusader, and even Argent Commander. This Mind Flay would also scale pretty well with spellpower, to the point where combining it with Malygos might be just a little too good. 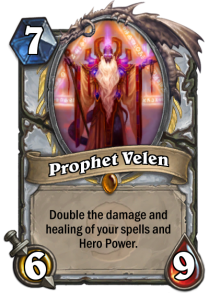 Ok, Back to our scheduled programming. As a 6/9 Velen starts looking a lot more appealing. No longer being a beast on his sights, the value of Velen rises considerably, getting the extra two health can really go a long way towards making sure that Velen lives to unleash the Holy Fire on your enemies. 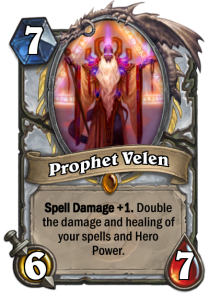 But maybe instead of adding 2 extra health, we can add Spell Damage instead, this gets the Velen + Holy Smite + Mind Blast combo to a staggering 18 damage. That might be a worthy finisher for control Priest. You could also heal 16 with double Light of the Naaru. And who knows what this version of Velen could do with Mind Flay, Mind Sear, Mind Spike, and all those Priest spells that have yet to be released.