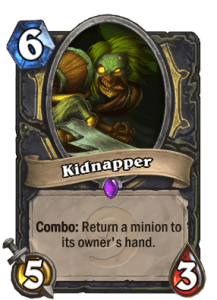 The Kidnapper has been long considered a weak card. Besides having some minimal use in a gimmick Mill Rogue deck, the Kidnapper doesn’t see play in any type of Rogue builds? But it’s not like he doesn’t fit any of the archetypes, the problem with this not-so-smooth criminal is that his stats aren’t enough for his high cost.

Why is he so bad?

As a 6 drop, the Combo ability on the kidnapper is really hard to proc. A coin+kidnapper turn 5 could be a really strong tempo play but you are not going to get it consistently. Even if you consider the Sap ability as being worth 2 mana, he would still be just a 4-cost 5/3 . That’s again not really a card you’d consider using. Now compare it with our boy SI:7 Agent, his combo ability is like a Holy Smite or Arcane shot, valued at 1 mana.  So you’d have a 2-cost 3/3, and that’s really cost effective. But that doesn’t even consider that the Agent’s combo ability is much easier to proc. You can easily see how the Rare card is a better deal than the epic.

Now lets compare it to another 6 drop. Fire elemental is a 6/5, and has a Battlecry that’s comparable to Dark Bomb, a two mana cost spell just like Sap. Not only are Battlecries better than Combos, but Fire Elemental has much stronger stats. The only positive is that Kidnapper gives you the flexibility to bounce back one of your own minions.

But Kidnapper is an Epic card, lets compare it then with a 6-drop class epic. Cabal Shadow priest actually has the perfect stats of a stellar 4-drop, and his battlecry is definitely worth the 2 mana added cost. Once again Rogue is getting the short end of the stick here.

So you could take the Kidnappers artwork and name, make literally any other card, and it would likely be better. But what’s the fun in that? We want to stay true to the spirit of the card so we are going to try and find out what’s Kidnapper proposing as a strategy.

With Kidnapper you immediately think about the name implication. The Kidnapper wants to take your opponents minion and if they really want them they have to pay again. The Kidnapper proposes a big tempo swing taking one of your opponents big minions back to their hand and leaving you in control of the board. The Kidnapper uses Rogue mechanics so he’s rocking a Combo rather than a battlecry, we’d like to preserve that.

Stealth! 5/3 Stealth doesn’t sound too bad for a 4 mana card. It’s basically a Panther with a banana, still not the strongest of cards but a good start. Another idea is bringing the mana cost down to make the combo avaliable earlier. In fact, Kidnapper used to be a 5-drop.

@oElementz actually kidnapper used to be 5 once upon a time and it was hyper frustrating. We nerfed it late in development.

Was the nerf  really warranted? I’m guessing the meta was hugely different back in development, maybe a 5-drop Kidnapper is just what we need to open up a new Rogue Archetype.

Finally, there’s always the option of bumping the stats up, a 6/5 Kidnapper would be comparable with a fire elemental and the stronger ability would be justified by that fact that it is an epic card and it is a Combo rather than a battle cry. The big body would be definitely able to impose the board presence necessary to justify his high mana and arcane dust cost. Again, this might just be a part of Fire Elemental being really OP for a base set card and actually being worth the epic rating.

Another idea would be making the Kidnappers ability more like a freezing trap, then again you would lose out on the ability to bounce your own minions back. Unless you make it a Freezing Trap/Shadowstep hybrid, now that would be baller but fitting the text in the box would be a challenge. 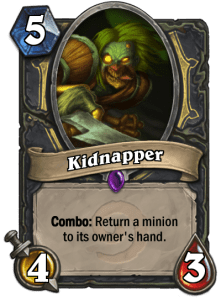 This is the faster version, we docked 1 attack just because we heard it was hyper frustrating back in development. Rather err in the safe side, right? 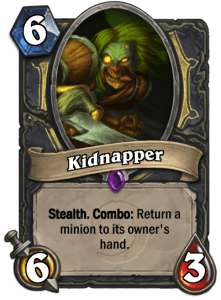 Now this bad boy feels a bit more epic. 6/3 Stealth would likely make a pretty sick 4-drop. This might be me overcompensating a bit for the weaker “fast” version. Perhaps a 5/3 statline would be more balanced. 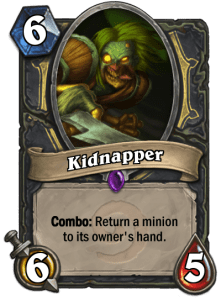 Here we have Kidnapper Part 2: Better than Fire Elemental. Now this version of the Kidnapper is a really, really solid card. Like Fire Elemental and Cabal Shadow Priest, it would get consideration in a lot of rogue decks. A dude like this could definitely make new styles of rogue popular and viable in competitive play. It probably needs to lose the ability to bounce friendly minions, that way the comparison to Fire Elemental is more legitimate. If this guys is way too strong andt gets out of hand, you can always dock one health and make him vulnerable to all of the 4 attack minions that see play out there.

So what do you say guys, any of these versions worth the 800 dust and the 2 deck slots? Let me know via twitter at @DannieRay23, or use the comment section below. Also, if you have a suggestion for which card should get the mending treatment next, I’m all ears!

0 responses to “Mending Mondays #2: His buff got Kidnapped”