Goblins vs. Gnomes has been out for  a week now and our BlizzPro team have been playing and discussing the new cards all week. One of the toughest questions asked is “Hey, I have enough dust for a legendary, which one should I craft?”

Vol’Jin was unanimous as the top choice among our team. I dislike putting a class legendary at number 1 simply for the fact that I feel a top legendary should be something many different decks could use (think Ragnaros). However, it’s hard to argue how good Vol’Jin is and why he gets the number 1 spot. He singlehandedly takes priest from a good spot in the meta to a great spot in the meta.

Some new players might think placing a 4/5 Yeti on turn 4 and then dropping Vol’Jin on turn 5 targeting their Yeti to get a 6/5 is an awesome turn. However, it’s even better when your opponent drops the turn 4 yeti and you target it with your turn 5 Vol’Jin, He can easily trade that opponent’s turn 5 4/6 Druid of the Claw with taunt that you can now easily kill with your Harvest Golem. He effectively makes what was once a 2 for 1 trade in your opponents favor to a tremendous upswing to your own favor.

Turn 5 is such a pivoting point in the game of Hearthstone that if you get momentum in your favor at that point, you’re forcing your opponent to play with their back against the wall the rest of the game. That’s how great Vol’Jin is and why he’s at #1 at our legendary cards to craft in GvG.

I originally had Dr. Boom off my list in the top 5. Everyone else had it in their top 5. I didn’t buy into it until I played some games with him. I immediately decided he does indeed belong at #2 on our list.

The first thing to note about Dr. Boom is to just take a look at how many good 7 drops there are in Hearthstone. Unless you’re playing a Druid (Ancient of Lore and Ancient of War) or a Warrior (Gorehowl) all you had for an option was basically Baron Geddon and he only fits into a control deck. Dr. Boom fits into really any style of deck and he’s here to ruin someone’s day and it’s not yours.

The second great thing about Dr. Boom is his stats – a 7/7 for 7 mana. That by itself is ridiculous when you look at the other 7 drops in the game. To make matters more absurd, he can’t be silenced. Well, I guess he can but it doesn’t affect him any. That by itself makes him nearly as potent as Ragnaros other than the fact he doesn’t do any damage the turn he’s dropped.

The third great thing are the minions that come with him. Little 1/1 boom bots with deathrattle that when they die they do 1-4 damage to a random enemy. Just run them into creatures and watch them explode – guaranteed damage unless your opponent decides to silence them.

I’ve seen Dr. Doom change the course of the game by just getting dropped. He can turn things around for you or he can carry you on to victory when you’re already ahead. For this reason alone he ends up as our #2 legendary to craft and our #1 neutral legendary.

Troggzor the Earthinator is another great 7 drop. He loses to Dr. Boom simply because his stats are a little weaker at coming in at a 6/6.

What he makes up for that though is his ability. His biggest strength is the fact that your opponent has some very difficult decisions ahead of them on how to deal with Troggzor. The moment they cast a spell to kill him, he spawns a Burly Rockjaw Trogg. If one spell isn’t enough to deal with him then 2 would be silly to even try as he’ll just spawn another friend while the first one gets bigger. Seriously, it just gets completely out of control if your opponent allows it to get to that point and they might as well concede.

The only way an opponent can deal with him is either with silencing minions like Ironbeak Owl or trading minions. If they go the trading minion route it’s nearly guaranteed he’s a 2 for 1 trade in your favor.

So either way, even if Troggzor gets silenced you don’t lose out and end the day with a powerful 6/6 to make your opponent pay for silencing him and keeping him alive. This is why Troggzor ends up as #3 on our list. 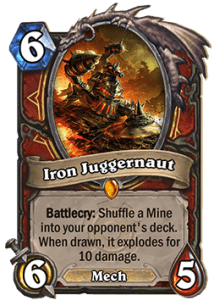 Another class legendary hits our top 5 list and looking at his stats I think you’ll understand why.

Just take a look at the other 6 drop legendary cards out there that were popular – mainly Cairne Bloodhoof, Sylvanas Windrunner, and The Black Knight. The Black Knight is a very situational card while Cairne and Sylvannas have worse stats and the threat of getting silenced to avoid their death rattles. Iron Juggernaut can be silenced all he wants and it won’t matter.

Iron Juggernaut can be killed and it won’t matter.

You know why? Because the rest of the game your opponent is going to be praying they don’t draw the mine you just shuffled into their deck because that’s 10 damage they can’t avoid. Basically Iron Juggernaut just gave you a chance at a free pyroblast.

Iron Juggernaut is going to be a staple in Warrior Control decks where games have a good chance of your opponent drawing the mine and while you’re sitting on top of your mountain of armor you’ve made for yourself, your opponent will have to constantly know in the back of their head that you have a nearly guaranteed 10 damage coming at some point in the game and you’ll effectively get in their head and possibly force them to make some mistakes on the way. This is why he’s #4 on the list and in our opinion beats out Mal’Ganis.

Know what’s better than all 3 of them? a 5/7 with a battle cry and a deathrattle ability. Sure, he can be silenced like Cairne and Sylvannas which is the reason why he ranks below Iron Juggernaut, but he’s going to be tough to deal with regardless at this point in the game.

Add to the fact that when he’s cast you’re going to get a random spare part which could help you out but when he dies you get another one as well.

I feel that Toshley is very underrated currently in the game and we’ll start seeing him more. Our team was split on having him in the top 5 but his stats alone are what ended up getting him there. He’s definitely not as flashy as the 4 above him and he’s not going to singlehandedly win you a game like the other 4 could, but he’s a very solid pick that could be put in nearly every single deck. I could definitely see him being a staple similar to how Loatheb was with Curse of Naxxramas.

These are the ones that ended up in some of our team member’s top 5 but ultimately got voted out. Mal’Ganis was in nearly every single one of our top 5’s but ended up getting beat out when they argument came to be that not only is he a class legendary but he has to go in a very specific deck and about the only way you can get him to work correctly is with Voidcaller. By the time you get him out late game on turn 9 he just becomes a “win more” card meaning you’ve probably already won at that point and now you’re just rubbing it in.

Trade Prince Gallywix showed up in a couple lists and a 5/8 for 6 mana definitely lists him up near Iron Juggernaut and Toshley. In the end it came down to just a little too much RNG when it came down to it. We didn’t like the idea of having another class legendary in the top 5 when there’s already 2 up there and the idea of this article is to try and show you legendary cards to craft that will give you the most value as they can across multiple decks. With that said, if you’re running rogue, Prince Gallywix is still definitely a consideration.

Sneed’s Old Shredder only showed up on my own personal top 5 list and he was voted out because not only can he be silenced, but you could end up with a pretty crappy legendary card as well. However, I put him up there because every time I’ve played him it’s just fun. Yeah, his 5/7 stats for 8 mana isn’t all that great, but the chance of possibly summoning a Ragnaros or Ysera when he dies just fills me with delight. I don’t think we’ll see him much in the competitive scene, but if you’re looking for a fun card to mess around with, this one is definitely for you.

0 responses to “What Goblins vs. Gnomes Legendary Should I Craft?”