Like in most games, Hearthstone, at its core, is a game of resource management. There are obvious resources, like your mana or amount of cards in hand, but there are also more subtle ones, like your life total and amount of cards remaining in your deck. All of these resources are finite, but in Hearthstone you also have Hero Powers, which in a sense could be considered as a sort of reusable resource. One of the important skills to getting better at this game is the management of these resources to gain as much advantage as possible.

Mana is an obvious resource and I will talk about it briefly. Most of the difficulty in the usage of mana comes with timing spells and curving out. In most scenarios, trying to get full use of your mana is the best option. For example, if you are at seven mana and have a six drop, a three drop, and a four drop, playing both the three drop and the four drop will usually give you more advantage than playing just the six drop. This case would be different if that six drop were a four drop and playing it plus your hero ability would potentially be worth more. Considering these options in every situation is crucial to better understanding mana curves and the proper usage of your turns. 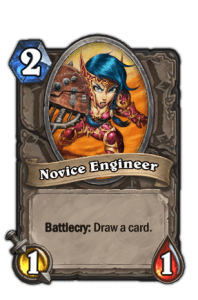 The amount of cards you have in hand is normally out of your control. You start with a set amount and, under normal circumstances, just draw one at the start of your turn. Card drawing abilities are therefore powerful effects because of the previously mentioned one-card-per-turn limitation. It gets even better when attached to minions or at a low cost. Minions that draw you cards always put you ahead in card advantage, as they represent board presence and replace themselves in hand. This makes things like Novice Engineer actually playable in Constructed. We could not talk about card drawing without mentioning the Warlock’s Hero Power, Life Tap. It is really good in constructed because it constantly fills your hand with cards at the low cost of life and two mana.

This leads us right into talking about life as a resource. Life is a finite resource that defines the outcome of games. The value of life is hard to quantify as it increases as its quantity decreases. The last point of damage you take is infinitely more valuable than the first and depending on what class/deck you are playing against, certain life totals can mean the difference between winning and losing. When playing against something like Miracle Rogue, being at 18 life means that triple Leeroy Jenkins kills, so if they have the combo, there is no real difference in being at 18 or 17, but going down to 16 means that you are now also dead to Leeroy with Shadowstep and Cold Blood. This also holds true for being at numbers like 10 or six against Mage. Knowing how much you can push your life total before you are endangered with a lethal spell is very important and this only comes with knowing match-ups and decks pretty well.

There is a rare point that occurs in some games where your only out is to play towards fatigue. At this point, the amount of cards in your deck and opponent’s deck become very relevant. Normally, you would want to draw more cards than your opponent but at times like this, you have to change your mentality and play differently. You are going for the long game and controlling your opponent’s board is more important than trying to deal lethal. By this point, you already know you can’t play to win with the remaining cards you have in deck, so doing your best to stall games out is your only option. This will not occur often, but you always have to keep this option open and not forget that running out of cards is a possibility.

Managing resources comes mostly with practice, but I hope that with this overview you can have a better look at some aspects of the game that are not as obvious.