The Intel Extreme Masters (IEM) tournament event held in Katowice, Poland and presented by The eSports League (ESL) this past weekend was a major success. I followed most of the Starcraft II action and even some of the League of Legends games and the word of the weekend had to have been “epic.” There were so many sick plays, strategies, and trophies plus prizes, of course, that could all only be described as truly epic. Hearthstone, however, was not one to be left out of the mix either and, debuting for the first time at IEM, our favorite card game made its presence epically felt.

Separate qualifying rounds preceded the weekend’s streamed semifinals/finals in order to determine the representatives to join the two invited players, Artosis and Gnimsh. These familiar names were joined by Lothar, who won the Poland-specific Qualifier, and SineX, the European Qualifier winner. Both SineX and Lothar boast backgrounds in competitive card games previous to getting their starts in Hearthstone, so the decks were stacked for high-level play and the games did not disappoint.

The format was simple and brutal – a best of five, single elimination bracket, with the winning deck continuing on until defeated.

Gnimsh gets the best of Artosis for a second weekend and tournament in a row! The matches were great and fun to watch. For a small exhibition tournament, IEM Katowice did the best they could with the production assets available to them. I look forward to how Hearthstone will continue to grow as the game matures and new features that enable smoother e-Sports production are added.

All of the prize cards can be viewed here. 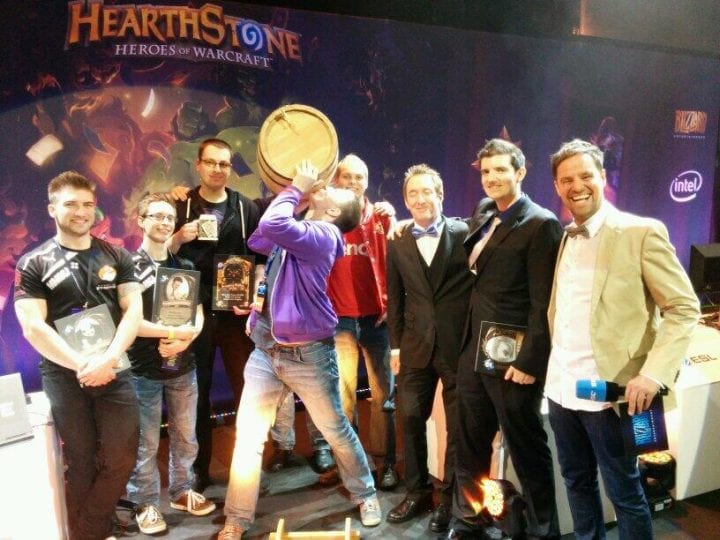 The players and the casting crew.