Deck slots are precious, and several cards in Hearthstone are somewhat similar. So which one do you choose? Every Saturday, we take a look at two somewhat similar cards, and two of our writers will duke it out and make their best case to convince you that their card should be the one deserving of one of your precious deck slots. 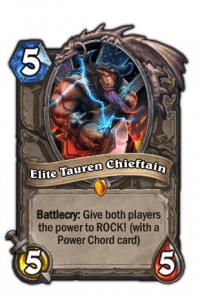 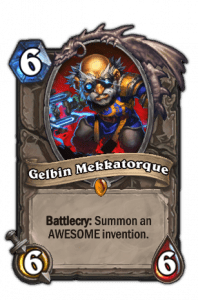 Rongar: This week, Leviathan and I had something truly spectacular planned, but then Blizzard ruined our plans by going all “live Hearthstone” on us. To celebrate this momentous occasion, we decided to feature the two big, bad legendaries, Elite Tauren Chieftain and Gelbin that players could have earned at some point during the beta period (yes, the Elite Tauren Chieftain was really in connection to BlizzCon, but I have no beef with that).

Let’s go over the basics: cow puns versus gnome punting jokes, one grants random cards, the other summons something. You can play the Elite Tauren Chieftan as early as turn five, but then you’re out of resources to take advantage of the 4 Mana card he grants you. If you keep him until turn nine though, you have the potential for a nice one-tow punch (the benefit of that strategy notwithstanding). Gelbin will require you to wait one more turn, but you have the benefit of scoring that AWESOME invention right away.

Both minions are rather good value for the cost, but if you hate RNG, either one will make you slightly queasy. If you play constructed decks to win, I almost guarantee that neither minion will ever seriously cross your mind.

In terms of pure RNG value, the coin flip for the Elite Tauren Chieftain has much more impact than the coin to flip for Gelbin Mekkatorque (aside from the fact that one of his inventions can turn Gelbin himself into a chicken on the very next turn, which is ALWAYS hilarious). Sure, you have to wait one more turn, but for 4 Mana you could potentially land Cairne Bloodhoof. Or your opponent could. I’m not sure if this makes the card objectively “better”, but the Elite Tauren Chieftan has more potential to create absolutely epic moments than Gelbin. For you or your opponent, and that’s sort of the point.

Leviathan: This week, we’re covering two Legendaries that I own, have used, and then quickly have removed from my decks. Don’t get me wrong; these cards are awesome with every strict sense of the definition of that word. The results often leave me in awe as I see my opponent get the Rogues Do It… almost every time that it would be perfect against one of the minions on my board or for removing ETC himself. Gelbin’s results aren’t any less forgiving as  I can’t tell you how much “fun” it is to see your board get decimated into chickens. However, given certain circumstances, the other inventions suck when used against you, yet won’t destroy your chances of winning. In the very few instances I’ve played Gelbin, I don’t think I’ve ever seen the Repair Bot (the only non-RNG fueled invention), but all of the others have reared their strange and ugly (beautiful?) heads at one point or another. Here are the options:

By comparison, if you have no area-of-effect (AOE) spells in hand, play ETC, and give your opponent I Am Murloc, well, good luck. If it’s against a Warlock with an actual Murloc deck… InstaRIP.

Rongar: Do you like fun? Sure you do, and there is no card more fun in Hearthstone than the ETC. I’ve only run into this minion one time during a match, but he will bring the biggest, goofiest grin to your face. I don’t know if this makes the Tauren better, but he can do this:

Leviathan: I’m going to go ahead and take this way too seriously as these cards are obviously novelties, not really meant for serious competitive play. That’s just how I roll. 5 mana for a 5/5 and 6 mana for a 6/6 is fair. Nothing to write home about. However, ETC is similar to Coldlight Oracle in the way that you’re more measuring the “Can I Risk Giving My Opponent More Weapons” factor versus the actual body that you’re laying down on the board. In Gelbin’s defense, at least the Repair Bot is an actual positive outcome for you, assuming it actually gets to trigger its card draw. Perhaps the biggest drawback to ETC is that to take full advantage of his offerings, you would need a 9 mana turn, usually. With Gelbin played on that same 9 mana turn, you could pair it with a Shattered Sun Cleric and buff the invention to not only let it attack next turn, but also make it a little hardier. That really brings me to my point – even though Gelbin’s inventions are essentially loose cannons (pun intended), it helps you build up your board state. Your board state may not look the same or healthier by the time those inventions are done with it, but in the instance where you need to get max value from a Defender of Argus, Flametongue Totem, or some other “buff adjacent minions” card, Gelbin gives you that 2-for-1 deal. You just may not be able to predict the stability…but we’re all here playing Hearthstone for fun and wacky RNG anyway, right? Right?!

What do you think? Did one of our writers make a compelling enough case for you to pick one card over the other? Share your thoughts in the comments below.