I don’t know about you guys, but I love going second in Hearthstone.

Empirical data posted by Ben Brode back in September suggests that there’s no actual advantage, but I know that, personally, my odds of winning are far greater when I have The Coin on my side. The Coin allows me some additional options during a match, and today I’ll talk about some of the most advantageous methods of using the one time mana boost.

Regardless of your master plan in a match, taking control of the board is paramount. Control deck, aggro deck, it doesn’t matter. This can be accomplished by savvy use of spells or dropping a minion on the board early on in the game. If the latter option appeals to you, consider cashing in The Coin early for an Amani Berserker, Faerie Dragon, Knife Juggler or any number of aggressive two drops. If you’re running Acidic Swamp Ooze (and you should be) and your opponent wears cloth, as opposed to leather, mail or plate, throw it down on the board on turn one and force your opponent to respond.

Good luck putting cream cheese on your bagel in a house with Knife Juggler.

Moreover, if you’re playing a Paladin deck and have nothing else in hand, it’s never a waste to generate a 1/1 Paladin token with The Coin on turn one. It’ll put a threat on the board that your foe will either address or leave alone, and the Paladin deck can do some spiteful things with two mana and a 1/1 on the next turn.

There are a couple of decks circulating right now that feature a lot of cheap early game minions. The best way to handle them, in my experience, is with a board clearing spell such as Consecrate, Blizzard, Holy Nova, et cetera. If the situation looks grim early on, but you’ve got The Coin and one of those spells in your hand, sit on The Coin, try and mitigate damage where possible and look to play one of those cards a turn earlier. One turn can mean the difference between stabilizing or bleeding out.

The Coin as a Spell/Combo Starter

Undoubtedly a source of frustration to many, The Coin does in fact count as a spell/combo starter, giving it sickening utility when used alongside cards such as Mana Wyrm, Gadgetzan Auctioneer, Questing Adventurer, Mana Addict, Defias Ringleader, Edwin VanCleef and others. If the pace of the game is looking advantageous, it’s not a bad option to sit on The Coin until a time comes along where you can combo it with one of the cards listed above. That said, always use your head here. You might really want to use The Coin in order to get an extra card off of Gadgetzan Auctioneer, but it’s not worth sacrificing board control to do so.

Mentioned above, The Coin counts as a spell, meaning it also serves as Counterspell fodder. I don’t often run into a lot of Mages making use of that particular secret, but in scheduled matches or in tournament play, it’s not a bad option to use The Coin as a Counterspell check, especially if your deck features a few critically important spells that you cannot do without, such as Savage Roar or Bloodlust. 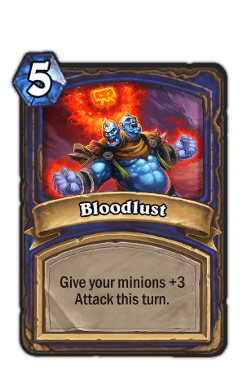 Counterspell tells Bloodlust to just chill the heck out.

Veterans of the TCG/CCG scene might be familiar with the term ‘sandbagging’. For those who are not, sandbagging is the practice of keeping a card (generally a mana source) in your hand in the mid to late portions of the match in order to make your opponent think you’re holding on to a reactive spell, effectively mind gaming them. Intelligent opponents will likely recall that you’ve not yet used The Coin, but against newer, or more inexperienced opponents, sandbagging The Coin might serve as a worthwhile strategy, especially if you’re playing a Priest deck and haven’t yet used a Mind Control. Your opponent might be hesitant to play that big, nasty minion, for fear of you simply taking it away.

The Coin is a powerful asset, and using it correctly in a given situation will help you get your match on track.

0 responses to “Intelligent Use of The Coin”